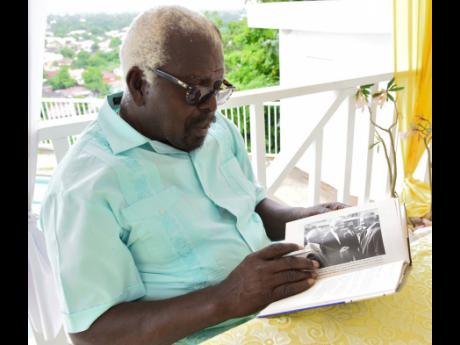 In his dying days, Michael Manley gave Pearnel Charles Sr a reason why he was locked in a blackhole at the army’s Up Park Camp base for more than nine months in the election year of 1976.

The now-retired Jamaica Labour Party (JLP) politician said that having lost the 1976 election, his detention and that of several JLP activists played a critical role in strengthening their resolve to uproot the Manley-led People’s National Party (PNP) Government in 1980.

“When I went to Up Park Camp, I saw the policeman who was in charge – Robertson – and I knew him well. I went in and said, ‘Good morning’. He didn’t answer. He said, ‘Take your clothes off – everything except your underpants’, and he weighed me,” Charles recalled in a recent Gleaner interview.

Through that keyhole, Charles said that he would often peek outside and would occasionally recognise other JLP activists being brought in for detention.

Charles said that during the time he was detained, he managed to make contact with a friend at the United States Embassy and arranged for his wife and his three daughters to be flown to the US as political refugees.

Charles’ wife had met in an accident in the US, and Charles, with the assistance of a high-ranking member of the army, sought release from detention, but the request was denied.

“He came back and said to me he was embarrassed. When he showed Manley the telegram and asked Manley that I be released to go and see my wife because the indications were that she is 50-50, he said Manley said to him, ‘Charles is a prisoner, not a free man’ and walked away,” the retired politician said.

Charles was placed under house arrest for the duration of the 1976 state of emergency after he was eventually released from Up Park Camp. He was later freed of serious allegations levelled against him.

“I felt that Manley, in detaining me, was upset about what had happened [in Nain] because it was rumoured that he said he would catch up on me,” Charles said, highlighting how Manley, as the leader of the National Workers’ Union, led a crowd at the bauxite plant to chase him out, which eventually led to Charles getting punched in the eyes and him shooting one of his attackers called ‘Cookie’.

Charles admitted that he even turned his gun on Manley, pointing it in his face before making an escape amid a hail of stones.

Charles said Manley was the chief witness against him during the trial on shooting-related charges.

He was eventually freed by a jury.

Charles said three public defenders had recommended that he be paid sums of between $5 million and $10 million after he was not compensated for his detention as others.

“Winston Spaulding was attorney general when the JLP set up an enquiry. I was to be paid, so I didn’t go to the enquiry because they had showed me I was to be paid. I have not had my payment yet,” he said, insisting, “I should be paid.”

Asked whether he has forgiven Manley for his detention, Charles said he did not hold a grudge against the former prime minister but used an occasion at Manley’s house to confront him.

“I say, ‘Michael, I can’t leave without I ask you a question. Why did you detain me?’

“He said: ‘Pearnel, I can take you to Jamaica House now. I’ll show you the prime minister’s seat and two seats: one for the major general and one for the commissioner of police. ... They visited me on a Monday and said, ‘Prime Minister, we are here to tell you that if you don’t allow us to detain Pearnel Charles, we will not report for duty on Wednesday morning, and no police or solider will be report’,” Charles told The Gleaner.

“He turned to me and said, ‘Pearnel, if you were prime minister and you were faced with that, what you would do?’ I said to him, ‘I would lock you up’, and we had a big laugh,” Charles recalled.

This was in 1997, according to Charles, the year Manley passed away.

Charles said he mentioned what Manley told him to former Prime Minister Hugh Shearer, who said it was not true.

“D.K. said, ‘I am going to tell you the truth why we detained you. ... Pearnel, if you were in power and Edward Seaga controlled West Kingston to Coronation Market to the east and wanted to put you, his number one man, to the west, where would we walk come to Kingston?’”

Charles was to run on the JLP ticket in St Andrew South Western, then a strong JLP seat, but was unable to do so because of his detention.