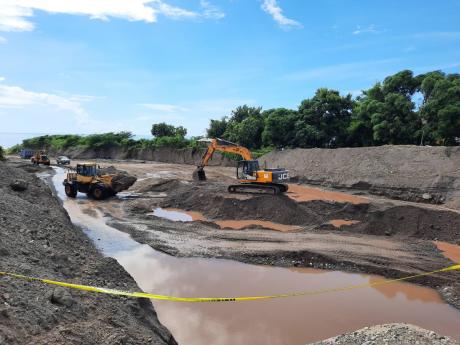 Photo by Corey Robinson
Bulldozers clear a gully in Harbour View, St Andrew, after a build-up of silt during recent rains. 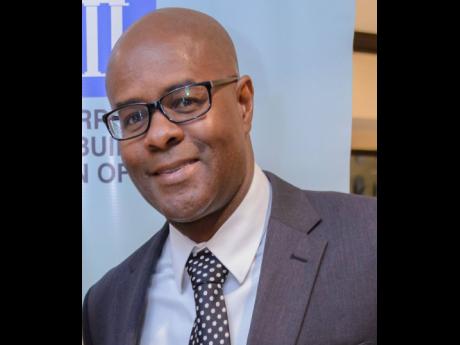 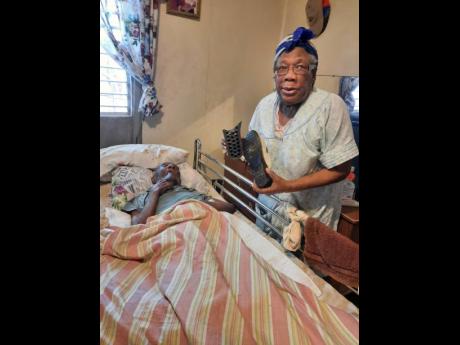 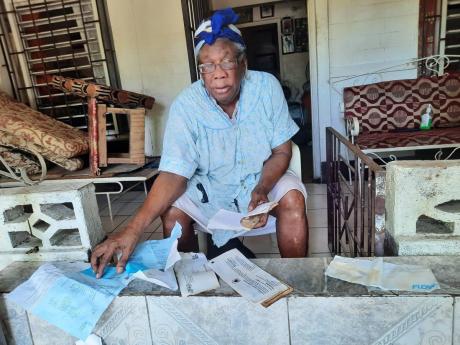 Photo by Corey Robinson
Letna Clarke lays out important documents to dry after they were soaked in her flooded home in Bull Bay, St Andrew, during rains last weekend. 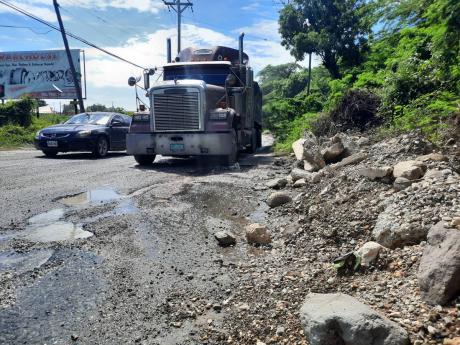 Photo by Corey Robinson
Motorists make their way slowly along a deteriorating section of the roadway leading from Bull Bay to St Thomas last week.
1
2
3
4
5

That is all it takes for floodwaters to come rushing over a concrete bulwark and into Letna Clarke’s home by the buckets.

This is how it has been for the last decade as poor drainage on a section of the Bull Bay main road in St Andrew East Rural directs rainwater inside the elderly woman’s home with only one change since then. Now her 97-year-old husband is bedridden and for the past two years, she has been the one lifting the mud slush from her living room.

Last week, Prime Minister Andrew Holness said preliminary estimates showed that damage to the island’s infrastructure from the outer bands of Tropical Storm Zeta stood at $2 billion and could rise as the island braces for additional rainfall from another tropical storm this week. Some 80 per cent of parochial roads were already affected.

The prime minister’s figure covers road and drain-cleaning, among other things, but does not account for the water damage sustained by an ailing Letna, who last week pointed to drenched furniture, and laid out soaked documents to the sun – casualties of a hasty evacuation two Friday mornings ago.

In fact, except for the ‘Samaritans’ who hoisted her frail husband, Vernon, from his flooding bed – and for those who hurriedly helped Letna pack and wade through knee-high water in her living room – not many saw the urgency of the ordeal. Most of her neighbours in Eight Miles were busy keeping out heavy swells from their own homes.

Cases like theirs have renewed calls among Jamaican engineers for the roll-out of a US$150-million comprehensive drain/flood plan that Holness a year ago said had been completed and would once and for all solve the flooding problems in the Corporate Area. He also said flood-prone towns such as May Pen, Santa Cruz, and Port Maria were on the radar to be remedied. It is estimated that it will cost US$1 billion to overhaul the drainage system islandwide.

The plan may be too late to inform the multibillion-dollar roadworks on Hagley Park Road and Marcus Garvey Drive in the Corporate Area, for example, continuous flood traps after heavy rainfall, but the engineers say it would help residents and motorists to better prepare as the Government tightropes a balancing act between efficient drainage across the island and other political obligations.

“It (drain) is not a cheap thing, but they (government) are not talking to the people to let them understand. If you are going to say you doing a drainage study, then the first thing you have to ask yourself is, who made the decision to build the roads without a drainage study? What was the rush?” argued Lenworth Kelly, president of the Incorporated Master Builders Association of Jamaica.

“Then you went and built all the roads one time. To me, that doesn’t make any sense. That was a political decision. Because you know you needed a drainage study, why you went in and build the road them before. What was the rush?” Kelly asked again last Thursday, listing political foolhardiness among the major hindrances to proper drainage and road construction across the island.

Some road contracts by the National Works Agency (NWA) and the parish councils, Kelly explained, pose geological concerns. These, however, are often overlooked because of expedience or a lack of money, leading to long-term flooding problems, especially in informal communities.

“All of the big contractors have to have engineers, and when you go and you happen upon a problem, technically, you can write to them and say you have these concerns, but under your contract, you have to perform,” Kelly explained, declining to name specific projects.

“Sometimes a man (member of parliament) just say, ‘Boy, I just want a road around there for my constituency. The last set a government paved out dem whole constituency so I want my own them pave out’. But those roads were initially built there because people went to live in a bush, and then they (politicians) went and cut a road to give them,” he charged, sticking squatting among the major issues plaguing drainage control in Jamaica.

He posited that some areas – like the corridor between Harbour View and Ten Miles in Bull Bay – are not suitable for settlements because of unstable soil, but last Friday, Letna testified to not missing a single property-tax payment, lifting hands to the heavens and praising her husband’s efforts to steady the sinking house behind flood barriers.

For the sake of Letna and her neighbours, engineers hoped the comprehensive drainage plan will be completed and employed prior to the completion of the Southern Coastal Highway Improvement Project currently underway. Even then, however, they may still be left behind.

“The extent of drainage infrastructure needed across the whole island is very great; and when developments expand, the cost of putting in all of the downstream infrastructure – the additional roads, the additional drainage – some of that has to be carried by the Government, ... . you would not be able to make any money,” argued engineer Ivan Foreman, a member of the Jamaica Institute of Engineers (JIE).

“The reality is that our economy does not create the amount of funds for us to afford all of the drainage infrastructure. So if you only have a billion dollars and you have to spend on education, health, security – all of the things the Government has to spend on – what are the priorities to put in place?

“Because drainage is not an everyday thing – people need to eat every day, people need education – the need for drainage infrastructure occurs like 20 or 30 days when you have heavy rains per year. So sometimes the decision-makers make rational decisions and it (drains) may have been left behind a little too much,” explained Foreman, citing outdated infrastructure and rapid urbanisation in towns like May Pen, Clarendon, as additional challenges.

Some areas will keep flooding

Incrementally, the island’s drains – which the engineers claim is for convenience as opposed to flood mitigation like the Sandy Gully which drains the bulk of the floodwaters from the Corporate Area – will be overhauled. But until then, there is a need for a frank conversation between the Government and the public.

“There are some areas that are simply going to flood from time to time, and if the people have the information, it makes for a better life,” offered engineer Glaister Ricketts, president of the JIE. “People will understand what to expect. We need to just level with the people.”

Last week, the NWA did not respond to questions regarding the current drainage plan and pointed to the prime minister’s declarations last week as the blueprint for repairs.

Holness last week said funds will have to be reallocated to effect road repairs.

“This is now about each ministry, each minister, each permanent secretary, going through their budget, line by line item, to see what it is that we can reallocate, and this will be supervised by the Ministry of Finance,” Holness told Parliament.

In the meantime, the NWA downplayed concerns regarding the availability of land space, particularly in the Corporate Area, to build efficient drainage. This was among the arguments – along with substandard construction materials and littering – that veteran road engineer John Allgrove posited.

Allgrove, who has worked for decades at the Public Works Department (now NWA) and as lead engineer at the Urban Development Corporation before starting his private consulting firm, made the suggestions based on his wealth of knowledge.

However, the NWA told The Sunday Gleaner: “Any amount of drain work can be done. It depends on the cost and what [the] Government is prepared to spend. Land is never an issue, unless it is in the context of cost vis-à-vis any budget.”