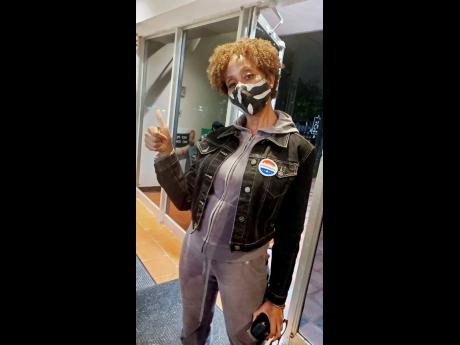 Contributed
Fresh from her flight, Nadine Sutherland poses for a photo outside a polling booth in Queens, New York, last Wednesday.

Her mid-morning flight from Kingston pulled up to the gate of Terminal 5 at New York’s JFK International Airport shortly after 3:30 p.m. last Wednesday. Three hours later, Jamaican reggae singer Nadine Sutherland was in a polling booth in Queens, having her say in electing the man to lead the United States in the next four-year presidential term.

Sutherland is one of thousands of Jamaicans in the New York tri-state region who voted early ahead of today’s final polling day. Wanting to avoid last-minute crowds at polling stations, they went ahead to back their candidate in this year’s high-stakes presidential election between the Republican incumbent Donald Trump and former Democratic Vice-President Joe Biden.

“I voted immediately [after arriving] because a lot depends on this election,” Sutherland told radio listeners on New York’s urban station WBLS FM on Sunday night. “I’d like to see hope, promise and a bright future for my young relatives who are about to step out into the world, and I want them to have positive role models that they can emulate.”

On Saturday, Sutherland had made similar statements, calling on Caribbean-American radio listeners in the all-important state of Florida to get out and vote.

Speaking on ‘Caribbean Riddims’, a popular Saturday-afternoon show in South Florida, Sutherland told host Eddy Edwards that she was immediately riveted by the fact that a candidate of Jamaican heritage, Kamala Harris, was making political history in the United States.

“I am extremely proud that a woman with roots from my sweet, sweet Jamaica and from my Caribbean region is running for vice-president, and I had no hesitation about doing a dubplate for Kamala Harris and, by extension, the Biden-Harris ticket so as to drive the Caribbean-American vote,” she said.

The popularity of the dubplate – a spin-off from her 1994 smash collab with Terror Fabulous called Action – has seen Sutherland being heavily requested by various media houses to push her message of to Caribbean-Americans.

“This is the first time I have got a sense off urgency among Caribbean people to vote,” Sutherland told northjersey.com, a New Jersey news website.

“We are all super excited to see the outcome, and all eyes will be glued to television [on election night],” the singer told The Gleaner.