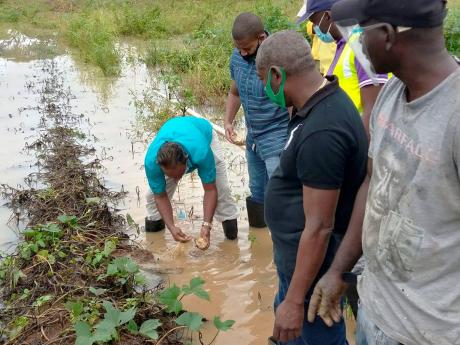 Fifty-year-old Wayne Kelly was a picture of disappointment as he waded through knee-high water on his 15-acre farm on Wednesday.

Dozens of sweet potatoes, his main crop, lay ruined in waterlogged areas and covered in mud and debris.

Kelly, who has been farming on the land for eight years, said that the damage sustained to his farm was unprecedented.

“Mi nuh only lose profit, mi lose everything. Mi haffi go start from scratch,” said Kelly, who has a contract to supply Caribbean Broilers with 50,000 to 60,000 pounds of sweet potato every week, and another client with vegetables.

Leading a tour of Clarendon farms on Wednesday, Agriculture Minister Floyd Green has described the flood damage as “a tremendous loss”.

The minister visited the Ebony Agro-Park and other farms in Bog Hole, McNie, and Mason River to get a first-hand view of the devastation.

“Sometimes you hear the figures, and you don’t know the impact until you literally come and see. I am also here to motivate our farmers and to let them know that the ministry and the Government stand with them,” said Green.

With an estimated $2.4 billion loss in crops and livestock, Green said farmers who utilised agro-parks have suffered significantly.

“These farmers use a business approach, so a number of them have markets and contractual arrangements that are affected, but some of our agro-processors are really understanding,” the minister said.

With flooding a recurring decimal, Green said that the Government and other stakeholders would have to review drainage designs and the crop calendar to determine best-practice cultivation timelines. He argued that shorter periods of more and intense rainfall required a change in the dynamics of farming. The ministry, he pledged, would offer technical support.

Green said that plans are already under way to offer support to affected farmers, noting that some interests have suffered 100 per cent losses. That commitment comes a day after he announced in Parliament a $120-million lifeline for fisherfolk hit hard by the COVID-19 pandemic.

“We’re not waiting to start offering support because we’ve already asked RADA to make some emergency funds available to assist farmers,” he said of the Rural Agricultural Development Authority.

Peter Thompson, CEO of RADA, told The Gleaner that some cultivaters had ramped up production because of the expansion of farmers’ markets to mitigate against dispacement caused by the coronavirus outbreak. These farmers he said, have also been gravely affected.

Thompson said that farmers were particularly motivated after the ministry purchased more than one million tons of agricultural produce from the field and mobilised distribution to urban centres.

“We were bringing in the market closer to consumers, and that created confidence. The farmers went all out in production because they saw that they could market their produce,” the RADA chief executive said.

“But, unfortunately, the flood came, and the net result is what we are seeing today.”