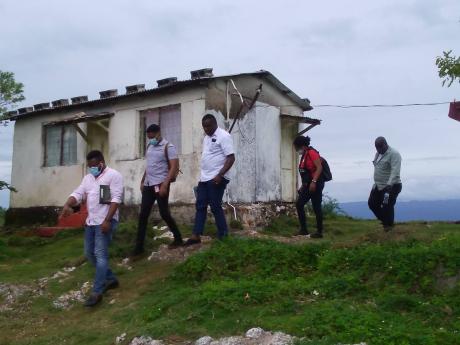 Gunshots shattered the calm in the quiet rural district of Good Hope, St Elizabeth, about 1 a.m. yesterday, waking residents, who were gripped with fear as they waited until daybreak to investigate what had happened.

When they ventured out as morning broke, they discovered that two brothers had been killed execution-style in their wooden house.

The victims, who residents say were hard-working ganja farmers, have been identified as 40-year-old Junior ‘Bill’ Castello and 53-year-old Evan Robinson.

Residents found the bodies of the two men lying face down in the yard with bullet wounds to the back of their heads and summoned the police.

The men’s pockets had also been turned out, suggesting that they had been searched.

Yesterday, as they gathered along a dirt track leading to the men’s house, residents said the murders came as a shock to the generally peaceful community.

Residents say that the brothers, who shared the same mother, had been living at the old house for a number of years. They were reportedly involved in the cultivating of short-term crops and the rearing of goats before branching out into ganja farming.

They theorised that the murders could be linked to another killing in the area a few months ago.

“A little thing gwaan inna de area where a youth get kill about three months ago. Dem bury him Sunday,” a resident revealed to The Gleaner.

“We hear seh a him friend dem come execute di brothers dem because Bill was on the scene when dem friend get killed,” another farmer said.

The matter is being investigated by the St Elizabeth police.