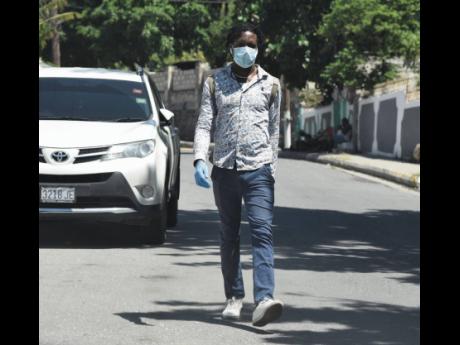 File
A resident of Shooter’s Hill in Seven Miles, Bull Bay, St Andrew, walks along the main road wearing a mask and gloves during the quarantine imposed on the area shortly after the coronavirus case was discovered in March.

Jamaicans were sent into a frenzy in March as news spread of the island’s first confirmed case of the coronavirus which causes COVID-19. Nine months later, however, there are indications that the virus that has claimed the lives of at least 218 Jamaicans may have touched down long before ‘Patient Zero’ did on March 4.

But it will take some time before three main pieces of research – including COVID-19 antibody testing being carried out by the Department of Microbiology at The University of the West Indies (UWI) – determine when and from where the virus came and the damage it may have done before detection.

The National Influenza Centre is located at the University Hospital of the West Indies and falls within the Department of Microbiology. It conducts almost all of the national PCR (polymerase chain reaction) tests to determine one’s COVID-19 status.

“It is likely that there were multiple people, probably even before that first documented case,” posited Dr Joshua Anzinger, senior lecturer in the Department of Microbiology at the UWI, on Thursday.

“Because of the asymptomatic nature of it and also the pre-symptomatic, you could come in [to the island] with no symptoms. In the beginning, we didn’t know anything about the virus,” noted Anzinger, a decorated virologist and one of 19 members of the UWI COVID-19 Task Force formed in February.

“At that time, it was symptom-based-detection, and, of course, we know now that we would have missed some people, so we are not certain if ‘Patient Zero’ was officially the first case,” underscored Anzinger, pointing to the benefits of a COVID-19 antibody study that would better explain the history of the disease on the island. “If there is a positive, for example, earlier in March, then that tells us that definitely it was here before, rather than that first case truly being the first official case.”

The studies by the Department of Microbiology are among several being carried out by local and regional bodies, including the Caribbean Policy Research Institute (CAPRI) and the Hugh Shearer Labour Studies Institute, on the impact of COVID-19 on Jamaicans living and working on the island.

The COVID-19 Task Force spans areas of virology, epidemiology and laboratory diagnostics, critical care, respiratory medicine, health leadership, among others, and the team is aimed at leveraging the university’s knowledge and expertise to assist the Caribbean in its response to COVID-19.

According to Anzinger, one study being conducted in collaboration with the Pan American Health Organization looks at the genetic sequencing of the virus. For that study, samples have been sent to Brazil for analysis, he said. The others are the assessment of the antibody test being offered through the department; and the final is research aimed at assessing how widespread the virus is in Jamaica.

“The third one we have planned, but we have not started as yet. We were planning to use samples that we collect routinely in the virology laboratory. So [these are] samples where people just show up for an appointment; they are not ill. One typical population to assess is pregnant women; they have to come in for visits to have repeat blood work done,” he said.

“So we are planning to look at antibodies in those samples over time to see where we are currently. It is very likely that we have an extreme underestimation of the percentage of people who have been infected with the virus because of limitations of the PCR testing approach. This will give us an idea as to where we are relative to other countries.”

Up to last Friday, Jamaica officially recorded 9,472 cases, 4,249 of which were active. This is while the country recorded 4,878 recoveries and 80 persons remain hospitalised. In addition to the 218 confirmed deaths, there were also 21 coincidental fatalities, while another 31 deaths were under investigation.

A total of 100,125 samples have been tested so far – a feat that continues to bring nightmares to staff at the department.

One lab technologist told The Sunday Gleaner that long hours with missed meals have been a staple for her and her colleagues, as they test hundreds of samples per day.

“It takes approximately seven hours for one batch to be completed, and we are completing five to six batches a day. It is about long overtime and lack of sleep. We are not allowed to eat the way we should because we have to be working back-to-back. Most of the time, we don’t leave here until 1, 2, 5 in the mornings,” she said, “and we would have been here from 8 a.m. the day before.”

Long working hours have also been a contentious issue for nurses, especially those in the North East Regional Health Authority, who have been left off of a daily $3,000 incentive from the Government while risking their lives treating COVID-19 patients with inappropriate personal protective equipment (PPEs).

While she declined to speak definitively, Edwards-Henry was not dismissive of Anzinger’s assertion, even as she pointed to patients who turn up and are treated normally for other ailments, but later turn out to be COVID-19 positive, putting nurses at risk.

“Up to now, there are persons who may have COVID-19 but are asymptomatic. So we are only picking up positive cases of those who we test, and we are not doing routine tests. So you and I who may have been in contact with somebody, we won’t be tested based on our risk. Only persons who are actually considered high-risk are tested,” said Edwards-Henry.