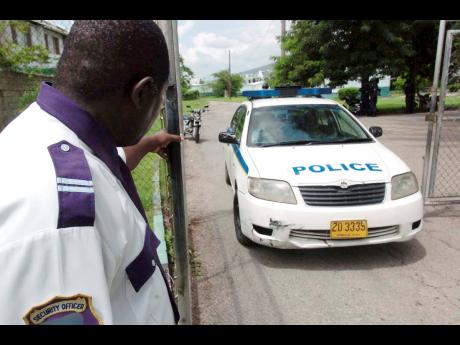 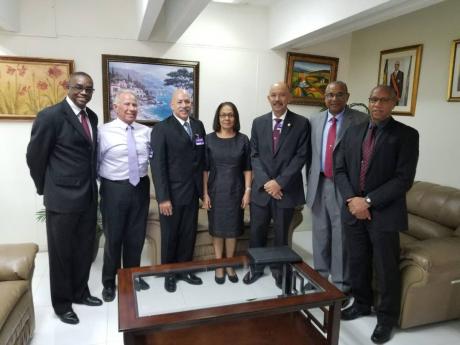 File
In this June 2016 photo, the executive of the Jamaica Society for Industrial Security (JSIS) executive posing with Minister of Labour and Social Security Shahine Robinson after paying her a courtesy call, discussing matters such as the ministry’s monitoring of the minimum wage compliance. From left are: Christopher Senior, Robert Epstein, George Overton, Winston Barnes, Ralston Pessoa and Basil Bewery. 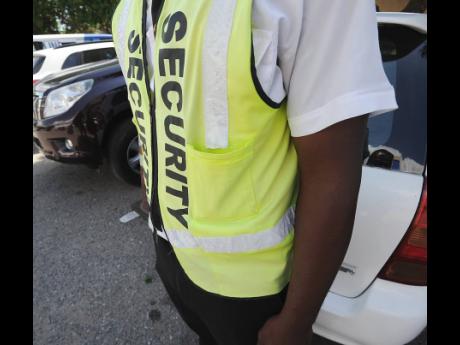 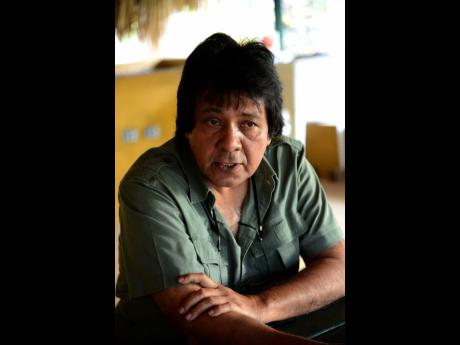 The National Housing Trust’s (NHT) insistence on getting $5 billion it claims private security firms owe for their workers is being viewed as an existential threat to the multibillion-dollar industry.

Granting security guards long-demanded benefits such as paid sick and vacation leave could form part of the remedy as firms are forced to seriously contemplate welfare concessions if the Government is to prevail on the NHT to withdraw its high court action against Marksman Ltd.

“I can’t tell you how troubling this is for everybody,” said a very senior administration official of the efforts of the NHT, which reports directly to the prime minister.

The decades-old issue has been ignored by successive administrations fearful of the backlash from operators, some of whom are key financial donors, as well as the chilling effect on the mass employment absorption capacity of the industry.

Private security firms, which currently employ 25,385 guards, have insisted that guards are independent contractors and not employees so they are not legally entitled to benefits such as paid sick or vacation leave.

The NHT, a state entity set up in the 1970s to promote homeownership, believes the workers are employees and holds the firms legally obligated to making employer contributions on behalf of the guards.

Aside from deducting two per cent of employees’ gross monthly salaries for NHT contributions, employers themselves have to give an additional three per cent per worker.

Many of the firms deduct and pay over the workers’ contribution but never the employers’. Many guards who try to get NHT mortgages to buy, build or improve their houses are denied on the basis that their full contributions have not been made.

Private-sector firms owe the NHT approximately $5 billion in deductions – both for their own portion and the amounts taken from the workers but which they have failed to hand over – for the period 2000-2019, the NHT disclosed to The Sunday Gleaner.

In 2016, the NHT revealed that nationally employers’ contributions arrears were approximately $59 billion, of which $20 billion was in principal and the rest in interest.

Of that figure, $3 billion was owed by companies who deducted the employees’ portion but failed to hand it over.

The NHT has hauled at least 10 private security firms before the Kingston and St Andrew Parish Court in an effort to enforce the contribution requirement.

The case involving Marksman, a member of the Guardsman Group, is at the Supreme Court, where the housing trust is hoping for a ruling to agree that guards are employees and not contract workers. The trial is scheduled to start on November 23.

The possibility of an unfavourable ruling is causing jitters in Government and the industry, leading to a flurry of attempts to reach an out-of-court solution.

An intervention from the authorities to settle the issue before the court date is needed urgently, argued Winston Barnes, executive director of Securipro Limited, one of the entities before the tax court.

“Whenever the courts make a decision, it’s not only binding on the parties involved, but … all persons in a particular industry,” he said, adding that any solution could be better than “having the court option”.

Summing up the fears of his colleague operators, Barnes said it would be “catastrophic” for workers and the firms if the industry was forced to pay up the billions in outstanding contributions because “most companies, including the wealthiest among us, would go bankrupt”.

All attempts to avoid that have to be made, especially considering the employment numbers and support to national security, argued two government officials close to the internal deliberations. However, the industry has to give something in return, they insisted.

To find a way out, Labour and Social Security Minister Karl Samuda met with four of the largest firms on October 29, where the phased introduction of benefits for workers over a five-year-period was among options discussed, The Sunday Gleaner has learnt.

Representatives from Securipro, Guardsman, Hawkeye and Atlas Group, who combined employ almost 5,000 guards, were at the meeting and are expected to discuss the options with the wider membership of Jamaica Society for Industrial Security (JSIS), which represents more than 80 per cent of the 300 operators in Jamaica.

Barnes declined to discuss the matter. So, too, did Kenny Benjamin, who heads Guardsman, the largest private security firm in Jamaica, and several other leaders who all directed queries to JSIS President Lt Comm George Overton.

Overton, who is also a director at Guardsman, declined to comment, noting that he is a key witness in the upcoming Marksman case.

“The ministry continues to dialogue with stakeholders to arrive at an amicable resolution in the interest of all concerned,” was all the labour ministry would tell The Sunday Gleaner, confirming nothing about the meeting or timelines.

Asked about the Ministry of National Security’s role in the matter, Minister without Portfolio Matthew Samuda would only say that “ the ministry engages the private security industry regularly and in a variety of fora”.

Samuda said the ministry was reviewing the 1992 Private Security Regulation Act, “with a view to bring an omnibus legislation to manage the industry as a whole”.

He acknowledged another dimension to the complicated nature of the problem now confronting the industry – the “extremely important” role it plays in complementing the work of the under-resourced state security forces in the country’s crime-fighting efforts.

“Their value is without question,” Samuda said of the sector in which the current number of registered guards is an 82 per cent increase over the 13,941 on record in 2009. The number of operators at the time stood at 212.

The growth spurt took place over a period marked by a worsening crime and violence situation seen in the country averaging 47 homicides per 100,000 of the population, almost six times the global average, and low trust in the State’s ability to secure life and property.

But the industry – plagued by rogue, unregistered operators and underpayment – is crucial to employment, mainly for its low barriers to entry.

That is behind the push to settle the issue with the NHT, fearing that an adverse court ruling could render thousands jobless and compromise national security.

The Government, however, has to be careful it does not set a “potentially dangerous precedent” in pursuing a solution that could include concessions such as writing off billions owed by the security companies.

“It’s rough all around because if the concession to the operators is given, workers still need their houses. Will the Government work out a way to accommodate the contributing workers? What will it mean for other industries with a similar issue?

“Furthermore, let’s say the matter goes to trial and the security firm wins and they don’t have to treat their workers as employees. The issue of the welfare would still be on the agenda. Government can’t ignore that much longer,” an official said.

Finance Minister Dr Nigel Clarke, a former NHT chairman, declined to comment as the matter is before the courts.

Up to press time, The Sunday Gleaner had not received data from the labour ministry and the HEART NSTA/Trust on the compliance of firms with statutory deductions to those entities.

‘Labour laws must change to suit the times’

A broader issue that has to be addressed, another government official lamented, is the “inflexibility” of Jamaica’s labour laws, which tie work to 40 hours per week.

Security guards, who are mostly not unionised, typically work for a minimum of 12 hours.

“Imagine a client wanting guards under a three-year contract. There’s no guarantee that a company will be reselected after that agreement ends, but if the guards become employees, the company will still have to pay them,” the senior administration official argued, adding that the contract employment allows for more flexibility.

“Don’t get me wrong,” the official hastened to add, “welfare issues like sick leave that define a modern occupational environment have to be addressed, but unions, politicians and the businesses have to get to a consensus that the labour laws here must change to suit the times,” he said.

“I’ve been doing this for 15 years and I can tell you, I cannot build a house,” a 45-year-old guard, who spoke on condition of anonymity, told The Sunday Gleaner. “Not because me nah save or me nuh have ambition, but the NHT turn me down all the while, saying me nuh qualified and my contribution not sufficient, only to find out it’s because of mi company.

“It nuh fair and I work very long hours. Sometimes double shift (24 hours). Memba wi nuh get leave with pay like most people. Me caa even afford to be sick.”

The minimum basic week’s pay set by the Government for an unarmed guard is approximately $11,460 ($242 per hour for 40 hours’ work, with an additional $44 for laundry). An armed guard gets that amount plus an additional $48 per hour as a firearm premium.

Another guard who works in the agriculture sector in western Jamaica argued that the Government “cares little about us”.

“They all know what we have been going through. Not going to lie, at least I don’t pay for uniform and when I got pregnant, I got two weeks, but it’s not standardised and others suffer,” she said.

What is happening with security guards is “a kind of exploitation”, argued Helene Davis-Whyte, president of the Jamaica Confederation of Trade Unions.

“When this whole issue of contract employment thing came about, it was employers seeking to rid themselves of statutory payments having to do with things like NHT, National Insurance Scheme, etc, because all of those have a component for the employer to pay, and some employers see it as a cost which they do not want to take,” she said.

“We can give the benefits, but we have to be prepared for the consequences,” an operator said.