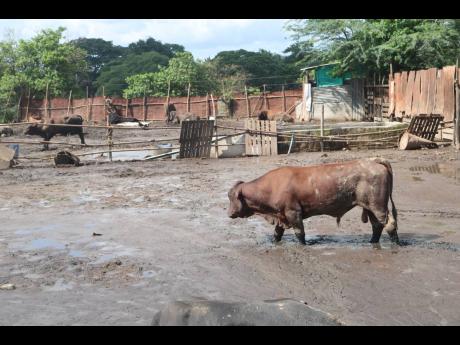 Photo by Christopher Serju
A young Jamaica Red Poll bull struggles to walk through the mud in his pen at Lakes Pen, St Catherine, yesterday. With more rain forecast for this week, farmers are concerned about how they will cope with flooding, which has made life unbearable for them and their livestock.

In an area of Lakes Pen, St Catherine, where livestock rearing is a major commercial activity for the farmers, The Gleaner encountered quite an eclectic mix of animals during a sojourn yesterday.

Evidence of the heavy rains in recent weeks was all around.

The cattle were mired in mud with their pen offering nothing in terms of solid ground, while nearby, a group of mongrel dogs kept guard from the safety of a dry spot they zealously guarded as a common fowl kept watch over the proceedings from the safety of a zinc fence.

A group of farmers watched incredulously, their consternation slowly changing to smiles when it became obvious that the Gleaner vehicle would make it across the riverbed where once there was a road. And they had a lot to share.

The pigs would be fine, they said, sharing concern for the piglets, which would be susceptible to the cold.

In fact, the cold weather was the main concern for farmers in the area.

“Because of the ongoing water, we have a lot of mud which rise on the animals. So in trying to escape from the rain, the goats will bundle up (huddle), trying to get some heat,” explained Keith Thomas. “Now, in trying to bundle up, they will accidentally trample the kids. So we lose a lot of young [animals] that way, because everybody a rush to the shed area.”

The goat and the larger animals, like the cow, are also susceptible to stress, Thomas further said, noting that they will try gravitate to higher ground or seek out corners of the pen where they are more likely to find warmth; and if they are comfortable, they will tend not to move for a very long time, not even to feed.

As a result, according to Thomas, the animals can easily become undernourished and may die.

“So the rain really mash we up, and if we get any more rain … ,” he said, trailing off as he contemplated the unfavourable forecast the Meteorological Service has made for the days ahead.

With no space on the mud-covered floor of the pens, the farmers have been putting the feed to the side, where some of the cattle reluctantly go to feed – a worrying sign for their owners.