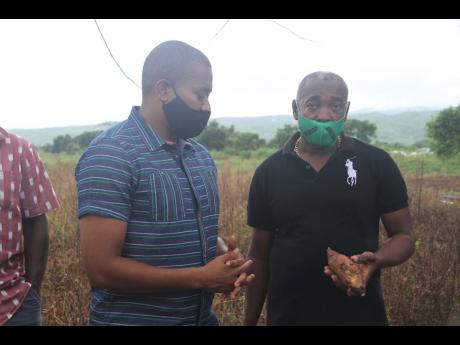 Nathaniel Stewart/Photographer
Wayne Kelly (right), farmer at Ebony Agro-Park in Clarendon, explains to Agriculture Minister Floyd Green the devastation wreaked on his sweet potato field because of extended rainfall. Green was touring the agro-park on November 4 with a team from the Rural Agricultural Development Authority to get a first-hand view of farmland flood damage.

The private sector is partnering with the Government to get farmers back into production quickly and reduce the need for imports by providing millions of dollars in supplies as the Christmas season approaches.

Minister of Agriculure Floyd Green is promising much-needed assistance to Jamaica’s rain-soaked farmers as Jamaica braces for another onslaught of inclement weather.

Green advised Parliament on Tuesday that the preliminary damage assessment for infrastructure such as farm roads and drains, protected structures, greenhouses, and catchment areas was already $140 million. In addition, 2,955 hectares of crops belonging to approximately 14,181 farmers were destroyed. The upshot: a $2.5-billion bill.

Twenty members of parliament from urban constituencies will be provided with $500,000 in farm aid, while 20 rural MPs will be receive up to $1 million in support. Twenty-one MPs in the worst-affected areas will get up to $1.5 million.

“A total of $64.5 million is to be dispatched through the MPs via RADA for immediate support to their respective constituencies,” Green said of the Rural Agricultural Development Authority.

Poultry, with a loss of $12 million, was the hardest-hit subsector of the livestock industry, Green said.

Sixty beekeepers tallied losses of $10 million to almost 300 colonies and more than 60 dairy and beef cattle, valued at $6.8 million, died.

“Overall losses for livestock amounted to some $38.9 million with a total of approximately 780 farmers being affected,” the minister said.