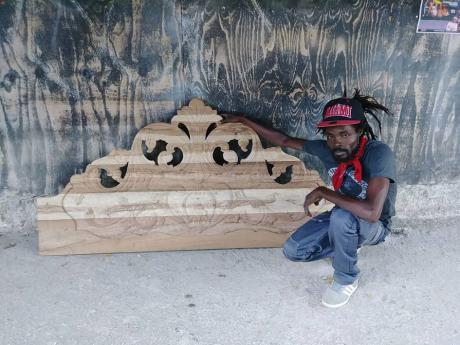 The sister of a patient who died days after reportedly leaping from the third floor of the Princess Margaret Hospital in St Thomas last Saturday is demanding an explanation from health authorities on the tragedy and why a request to have him restrained was denied.

It has also emerged that hospital officials had not, up to five days later, reported the incident to the Morant Bay Police Station.

“Something need fi talk out inna di world. Sad ... it hot! This is more than me can bear,” Shericka Thomas told The Gleaner.

Welton Thomas, 41, was taken to Princess Margaret on Thursday, November 5, by his sister, who reported that he was “acting strange” and complained of weakness and stomachache.

After being treated and sent home to his Springfield, Barking Lodge, home, with paracetamol and vitamins, Thomas was taken back to the hospital after Shericka and her spouse went chasing in the dark around 2 o’clock in the morning to retrieve Welton from a cane field.

Terrified that he could harm himself, Shericka said she requested to sign a document authorising healthcare staff to have Welton restrained. That request was rejected by a nurse, who, in turn, said that a doctor would have to issue those instructions, the patient’s sister reported.

To her surprise, her brother was not in his bed when she went to visit him on Saturday.

“One nurse say she a go downstairs and she look back she see him behind the door, and by the time she look back again, him jump over the stairs,” said Ms Thomas, recounting in disbelief what she was reportedly told by another nurse who sent her to the Accident and Emergency Unit.

“When mi go inside and see him, him was just groaning ... as if him inna a lot of pain.”

Mr Thomas was transferred to the Kingston Public Hospital by ambulance.

But during the journey, Ms Thomas’ worries deepened. An oxygen tank was not fully operational, she said.

The emergency technician requested to switch the oxygen tank, but a nurse responded that she would not stop “because a carelessness this”.

“Every time she a go out, she haffi stop fi fix oxygen,” said Ms Thomas, who was inside the ambulance.

Mr Thomas, a woodworker, was admitted around 2 a.m. after undergoing a CT scan.

Ms Thomas said that her brother underwent a coronavirus test on Monday because he had a cold. He was placed in an isolation area awaiting the result.

A day later, her world crumbled when she heard the words of finality:

“Sad news. Your brother passed away.”

Ms Thomas said she was told then that her brother had contracted pneumonia.

An autopsy will be conducted.

Superintendent Allison Byfield of the Morant Bay Police Station initially told The Gleaner that they were unaware of the incident and had not received a report.

After making enquiries with the hospital subsequent to The Gleaner’s call on Wednesday, Byfield disclosed that she was informed of the incident and told that the patient was sent to a hospital in the Corporate Area for treatment and was recovering.

The police superintendent is imploring the hospital to make a formal report of the incident.

Melecia Linton, chief executive officer of Princess Margaret, told The Gleaner that she was unable to speak on the matter.

Board Chairman Michael McLeod said that his was not an executive position and, therefore, declined comment on the incident.

Ms Thomas is distressed at the thought that her 14-year-old niece and one-year-old nephew are now fatherless.

Mr Thomas was also a painter, farmer, and an artist.

“It better him did just shut him eye and lay down and dead more than him haffi jump over someweh and mash up himself and dead,” Ms Thomas said.