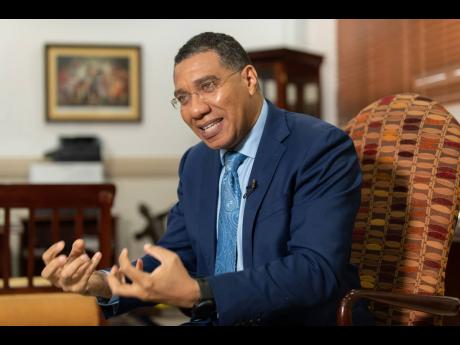 File
Despite multiple queries to the permanent secretary in the Office of the Prime Minister, Andrew Holness has been silent on the Puerto Bueno mountain dispute.

The treasured Puerto Bueno Mountain that is at the centre of an environmental dispute will host ecotourism developments as well as investments in residential and commercial operations, and clean energy, Jamaica World LLC has disclosed.

The site, considered a critical habitat for the endangered Jamaican boa and scores of endemic species, has been at the heart of controversy after it was revealed last weekend that the Holness administration overruled a state watchdog that had denied the investors a mining and quarrying permit.

Having received permission to mine 123 acres of the 569-acre property it owns, Jamaica World, operators of Bengal Development Limited, has sought to convince the country that it will be compliant with the 72 conditions outlined by state regulator, the National Environment and Planning Agency (NEPA).

Both NEPA and the Natural Resources Conservation Authority had denied the organisation a mining and quarrying permit because of the lands’ ecological value.

Managing partner Kashif Sweet, who spoke through the firm C.L. Environmental Company Ltd, said on Wednesday that quarrying was the first of a multi-phase property development on Puerto Bueno, also called the Dry Harbour Mountain.

But questions have arisen over C.L. Environmental’s current role as public-relations liaison for Jamaica World in light of the fact that it is one of the companies that conducted the damning environmental impact assessment (EIA),

Jamaica World said that approximately 22 per cent of the property would be subjected to mining operations, which environmentalists charge could threaten rare species that inhabit one of the few remaining dry limestone forests in the Caribbean.

A 2011 article carried by The Gleaner quoted environmentalists objecting to any form of quarrying, arguing that the site remained in virtually the same condition it did when Christopher Columbus dropped anchor off Jamaica in 1494.

A limestone quarry and crushing plant operated on the lands from 2001 to 2008 without planning permission from the then St Ann Parish Council or an environmental permit from NEPA, leaving local houses covered in dust and reportedly causing respiratory illnesses, residents said at the time.

This time around, the owners of the property, which include Duane Blake, son of late Shower Posse boss Vivian Blake, say they are anxious to become an integral part of the community, creating jobs, preserving and reclaiming the environment, while running a productive operation.

The investment will see the Jamaican Government earning more than J$635 million in taxes, plus employment of approximately 100 quarry workers.

On Sunday, NEPA’s chief executive officer, Peter Knight, outlined that solid conditions, aimed at ensuring compliance, were presented and signed off with the developers.

“Owing to the fact this was not a routine project, there is need to employ the services of a senior environmental person and a civil engineer to conduct the monitoring,” Knight told The Gleaner. The newspaper has learnt from Carlton Campbell, managing director of C.L. Environmental, that Jamaica World would absorb all additional expenses the new permit will attract.

Campbell also argued on behalf of his clients that 50 per cent of the 123 acres to be developed had already been quarried, with logging one of the factors that have disturbed the area.

Jamaica World has been blasted for introducing operations in a ‘no-quarry’ zone, but the company is not deterred, pointing out that none of the existing licensed quarries, of which there are three in the parish of St Ann, where the Puerto Bueno Mountain is located, falls within a quarry zone.

The company said that there are 24 quarry zones and 460 quarries across Jamaica, of which 90, or 20 per cent, are within quarry zones.

Jamaica World has also sought to downplay concerns over the impact of noise pollution, air-quality standards, and the impact on forest and biodiversity.

In compliance with the mitigated steps outlined in the EIA, the company promises that blasting will be conducted no more than twice per month, using licensed equipment to prevent rock falls.

They will also communicate with residents in proximity when blasting will take place.