Missing resident of Missionaries of the Poor leaves sister puzzled 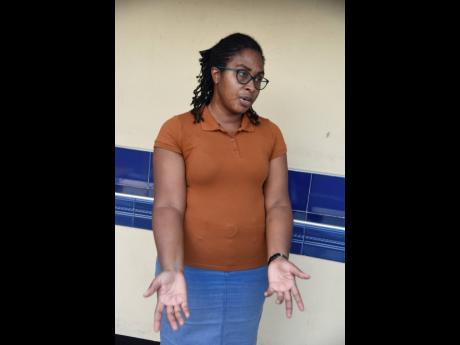 Nicholas Nunes/Photographer
Shemell James, sister of missing resident of Missionaries of the Poor, Ansel Morgan, expresses frustration as she is yet to find her brother despite a search to locate him.

The disappearance of 41-year-old Ansel Morgan from the Faith Centre Missionaries of the Poor (MOP) facility on Monday, November 9, has left his sister, Shemell James, and the operators of the facility bemused as to his whereabouts and how he could have left the property.

Morgan was born mentally retarded and has been living within the walls of the facility on East Queen Street in Kingston since 1996 after the passing of his father, who cared for him. For the past 24 years, his routine remained the same until Monday when he could not be found to be given his medicine.

Brother Alex Castaneda, who is currently overseeing the Faith Centre, told The Gleaner that Morgan was last seen around 12:30 p.m. at lunch in a red shirt and baggy jeans pants.

The Brother was among those tested positive for the coronavirus and is in quarantine.

Castaneda explained that Morgan was among the residents housed at the back of the facility away from those who were tested positive for COVID-19.

With a high level of security at the facility, Castaneda said only one thing comes to mind. “At the back of the house, there is a ladder … . I am presuming that he jumped from there into the gully,” he said. “That is the only possibility because the gateman holds the keys at all times, so I don’t believe he can go through the gate.”

He said an extensive search of the gully and areas close to the facility has been carried out, but Morgan has not been found. Castaneda explained that the wall is extremely high and if Morgan had fallen over, he would have sustained serious injuries.

Castaneda told The Gleaner that a Brother from Missionaries of the Poor made a missing person’s report at the Gold Street Police Station but was told by the police that a statement was not needed because Morgan is mentally retarded.

James has since made a report at the Central Police station. She said that the last time she saw her brother was months ago just before the COVID lockdown and that she had replaced her weekly visits with calls to find out how he was doing.

A distraught James is concerned about her brother, who is unable to talk and care for himself. She expressed disappointment in the Brothers of MOP.

James said that her presence at the facility pre-COVID was frequent as she not only cares for her brother but assists with the care of other residents, even taking them to doctor’s appointments.

“I feel betrayed. I feel as if my trust is betrayed because I felt at least they would have kept him safe,” she said.

James said she was informed of her brother’s missing status on Wednesday afternoon via a telephone call and within hours, the information received from the MOP proved to have been inconsistent.

She said that Castaneda told her that Morgan was missing since Monday, but Brother Roche, the secretary general of MOP, told Morgan’s other sister, Monique Morgan, who called from abroad, that he had been missing for four to five days.