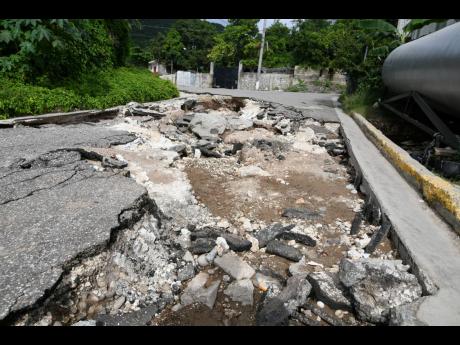 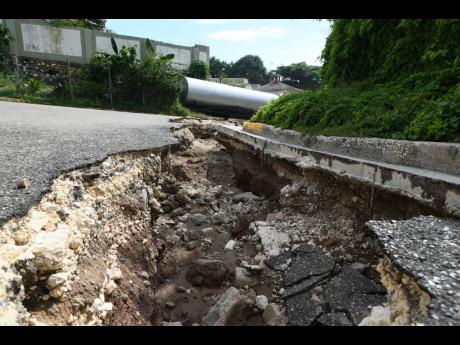 Rudolph Brown/Photographer
Contractors have blamed the National Works Agency for not including drains in the designs when roads such as this one in Harbour Heights are being constructed to make flood damage less devastating.
1
2

Heavy-duty equipment used to clear and rehabilitate roads blocked and damaged by islandwide flooding and landslides is costing taxpayers hundreds of thousands of dollars by the hour.

And while local contractors operating or renting the equipment have welcomed the business, three of them rejected claims that shoddy work on their part during construction was to blame for roads being destroyed by floodrains. Instead, they pointed to government delinquency and problematic designs for the widespread vulnerability of the island’s road network.

Their reactions add to concerns voiced last month by the island’s engineers, who blamed the island’s vulnerable drainage infrastructure on ill-conceived project designs and negligence.

For fear of being blackballed by their employers, the contractors – who are all officially registered to pursue government contracts – gave The Sunday Gleaner a breakdown on some of the costs last week on condition of anonymity.

“The bulldozers that you are seeing there out at Nine Miles [in St Andrew] are for about $18,000 or $20,000 an hour, depending on the size. There are small loaders that you can rent for $8,000/$9,000 an hour, but then you have the big ones, like those they are using at Nine Miles, that go for $12,000 an hour,” explained one contractor primarily assigned to jobs in the Corporate Area.

The company owner further explained that excavators are rented for about $16,000 an hour and burn a drum of oil daily.

“So if you add it up, we are talking about a lot of money,” he emphasised, noting that if workmen are needed, that is an additional $3,000 for each worker daily.

Up to last Friday, the National Works Agency (NWA) had not released an updated estimated cost of recent damage to the island’s roads. Neither did Prime Minister Andrew Holness in his address to Cabinet last week. But according to contractors, the $2-billion figure being floated around over the last month is like silt to an angry river.

“Those are just clearing costs. That money will not go towards repairing the roads that are badly in disrepair,” offered the contractor, who said that it would not be wise to spend a hefty sum on the Bull Bay main road, for example, which forms part of the ongoing Southern Coastal Highway Improvement Project.

Like the engineers, the contractors blamed the problems on a lack of drains, improper maintenance and overall design flaws that continue to deepen a hole in taxpayers’ pocket for clean-up costs each year. These flaws ultimately lead to widespread damage to homes and properties when rivers burst their banks and inundate communities like Weise Road in Bull Bay, St Andrew.

“The NWA will come out and say that they don’t have the money, but they take directives from the politicians, and when the politicians come out and say they want 10 kilometres of road, ... instead of doing five [kilometres instead] with proper drains, the MP wants to say he did 10,” explained another contractor, citing politically fostered squatting as another problem.

Last week, the NWA remained mum regarding criticisms from residents that the entity is to be blamed for breaking down an embankment to access the Chalky River in Bull Bay, resulting in the water tearing away the loose soil that it had been replaced with.

The NWA responded to queries of equipment costs, however, noting that they are rented on an as-needed basis and that the “rates are made available to all service providers with whom we meet prior to/at the start of the hurricane season. Cost is, therefore, a function of what is rented at the material time and the amount of time engaged,” explained the body.

“There is no maintenance and when there are concerns with designs that are overlooked because of money, then it is the contractors who get the blame for doing inadequate work. People don’t understand what contractors deal with,” one contractor lamented.

“As a contractor, I can tell you that there is no problem with us building the roads. The problem is that draining is usually not a part of the contract, which is the biggest problem in parts of my parish, and it is not only there,” offered another contractor assigned mainly to jobs in Clarendon and surrounding parishes.

“A lot of roads are being built and because of monetary concerns, they say no drainage is on the contract, but you must take water from the road properly in order for the road not to be destroyed,” he said, adding that such concerns are always pointed out to the NWA.

“But there is always no money, and your heart bleeds sometimes to know that you build this road knowing that very soon it’s going to mash up. If you want to shape the road a proper way, you can’t even do that because there are no drain designs to shape it on.

“Somebody is always going to take the blame, but you have to be reasonable. Contractors have to go through all kinds of standards and everything that we do has to be tested by the labs, and if they are not tested, you don’t get paid,” continued the professional, debunking arguments that contractors are sometimes inefficient and corrupt in executing their duties.

“Contractors can’t rob up money because contractors don’t pay themselves, and everything that we do has to be inspected before we are paid,” lamented one operator.

The Public Procurement Commission (PPC) is an independent commission of parliament mandated for the promotion of efficiency in the process of award and implementation of government contracts, ensuring transparency and equity. The body also registers contractors who are seeking to carry out government roadwork.

On Friday, Leevon Phillips, senior director of suppliers licence and registration at the PPC, explained that to his knowledge, no contractor has been blacklisted because of failure to effectively carry out their duties or corruption.

“It is quite a lengthy process to block a contractor, and at the PPC, we haven’t started doing that. However, we have a new department – Monitoring & Evaluation – and that will be looking at some work that we will be doing going forwards – looking into some of the operations of the contractors,” said Phillips.