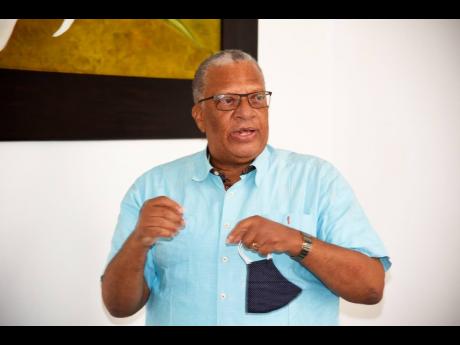 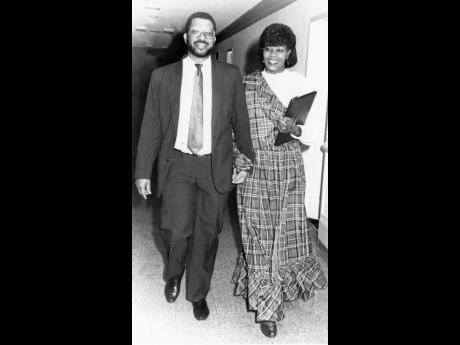 File
File Photos In this March 16, 1992 Gleaner photo, Minister of Labour, Welfare and Sports Portia Simpson is escorted into a banquet put on by the PNP Women’s Movement to honour her by PNP General Secretary Dr Peter Phillips. Both Simpson (later Simpson Miller) and Phillips would eventually become president of the party. 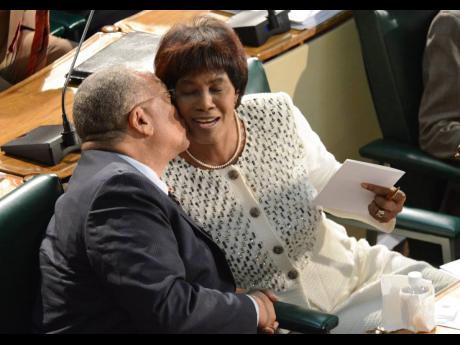 File
Dr Peter Phillips plants a kiss on the cheek of former Prime Minister Portia Simpson Miller at a June 2017 special joint sitting of the House of Repre-sentatives to honour Simpson Miller, who was retiring after some 40 years in represen-tational politics. 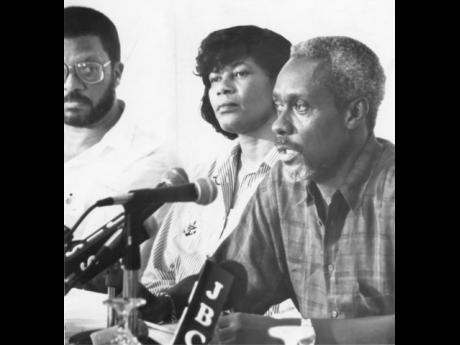 Gleaner Archives
PRESIDENTS IN A ROW: Prime Minister P.J. Patterson speaking at a August 1993 press conference in Ocho Rios after the resignation of Finance Minister Hugh Small. To Patterson’s right are Portia Simpson and Peter Phillips, both of whom would follow him as presidents of the People’s National Party. 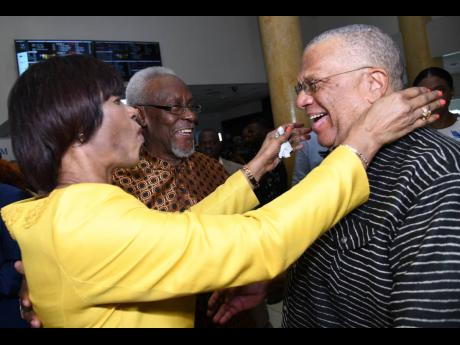 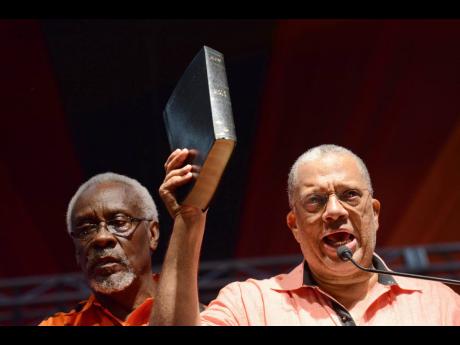 File
Former People’s National Party (PNP) President P.J. Patterson looks on as Dr Peter Phillips is sworn in as the new president of the party at a special delegates conference at the National Arena on March 26, 2017.
1
2
3
4
5
6

Dr Peter Phillips has admitted that his failed attempt more than a decade ago to wrest control of the People’s National Party (PNP) from then President Portia Simpson Miller was ill-advised.

And, while the PNP continues the search for answers for its landslide defeat at the polls in September, Phillips has acknowledged that he underestimated the depth of the divisiveness within the ranks of the 82-year-old political organisation.

Phillips, who rose to the presidency by acclamation in 2017 to succeed the retiring Simpson Miller, bristled at suggestions that he placed his personal ambition above the interest of the party. PNP insiders have chastised him for his stubborn refusal to step aside in the face of various opinion polls which predicted an embarrassing electoral defeat for the PNP under his leadership two months ago.

“Changing leadership at that time would have been devastating to the party. And it would have been emblematic, to my mind, of cowardice on my part – a dereliction of duty,” he told The Sunday Gleaner in his first interview since relinquishing the positions of leader of the Opposition and PNP president.

“I have never placed personal considerations above the party,” he said, although acknowledging, “I may have made errors of judgement.”

He insisted, too, that he is not consumed by the fact that he is now the first PNP president not to serve as prime minister.

“It doesn’t bother me; it has happened. What I have to do is learn to live with it,” the 70-year-old St Andrew East Central member of parliament (MP) said.

Phillips and the PNP suffered a crushing defeat to the Andrew Holness-led Jamaica Labour Party (JLP) in the September 3 general election, winning just 14 of the 63 parliamentary seats.

“It wasn’t a pleasant experience. No one likes to lose. It was a disappointment, without doubt,” he admitted.

In 2008, months after the PNP was booted from power by the Bruce Golding-led JLP, Phillips used a political rally in the east Kingston community of Harbour View to confirm that he would be challenging Simpson Miller.

“In response to the demands of thousands of Comrades at all levels of the party and the demands of citizens across the length and breadth of Jamaica who have asked that I accept your nomination to lead this process of renewal, my answer is a resounding yes,” he said at the time.

The challenge, Phillips explained, was his way of trying to defend a widely accepted convention in the political arena.

“When you lose, at least offer the party a chance to make a judgement, and that I felt strongly about it at the time,” he told The Sunday Gleaner.

Simultaneously, his action was setting a precedent he would later have to confront.

“I kind of unlocked the door for a pattern of challenges in the future. A lot can be said about when you shatter conventions. You run a risk, and in hindsight, maybe that was something that was ill-advised,” he said.

Does he regret the decision to challenge Simpson Miller?

“I have always said that regret is a wasted emotion because you can’t change anything that happened,” he responded.

‘Water under the bridge’

In September last year, two years into his tenure as PNP president, Phillips managed to fend off a challenge from then Manchester Central MP Peter Bunting with a 76-vote majority.

Amid claims that he was peeved by Bunting’s challenge to his leadership, Phillips insisted that he was not yet ready to discuss that issue.

“That’s water under the bridge. There is a time for that discussion; now is not that time,” he said.

When the dust settled on the sometimes bitter and contentious internal election, deep divisions emerged between party supporters aligned to Phillips’ One PNP team and Bunting’s Rise United camp.

But with the parliamentary elections looming, the leadership of the PNP went into damage control. As part of the efforts to present a united front, top surrogates from Bunting’s failed campaign were either returned to the shadow cabinet or given other positions of prominence.

However, Phillips has now acknowledged that the divisiveness was an “almost irretrievable condition”.

“And quite frankly, it extended throughout the entire period of my tenure as party leader,” he charged.

“If anything, I underestimated – despite my efforts to unify [the party] – the degree of the division,” he said.

Phillips was first appointed a senator and state minister in the Office of the Prime Minister between 1989 and 1991 before taking up the post of minister of special projects in the Office of the Prime Minister from 1991 to 1994. In 1994, he won the St Andrew East Central seat and then served as minister of health (1995-97), transport and works (1998-2001), and national security (2001-2007). He also served as minister of finance and planning in Simpson Miller’s 2012-2016 administration.

As he departs the national political stage, the former lecturer in the Department of Government and at the Consortium Graduate School at The University of the West Indies (UWI), Mona, said he wants to use his time to engage in something “close enough” to academic research.

During his time at The UWI, he published extensively on Caribbean development issues.

One of the things he hopes to bring greater clarity to is why Jamaica has not made as much progress as other countries of the region and the rest of the world in areas such as sustained economic growth and improved quality of life for its citizens.

“It is not my intention to make noise. It is my understanding to find understanding and to be able to share it such as I arrive at conclusions and to stimulate a discussion,” he reasoned.

“Not a discussion just like everybody talking off the top of their heads, so to speak,” he added, “[but] a discussion that pulls on people who are doing serious research and analysis locally, in the region or internationally, having to bear on some of these issues to share the benefits of their thinking.”