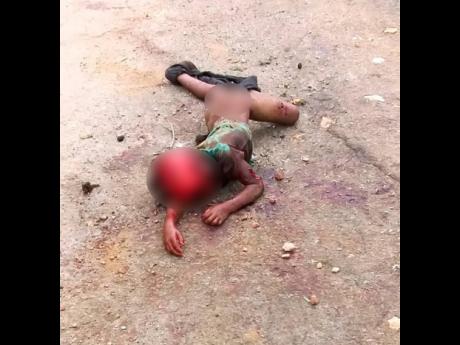 Contributed
Five-year-old Mickele Allen of St D’Acre, St Ann, was savagely bitten by a pack of dogs on Sunday.

A five-year-old boy is battling for his life in the St Ann’s Bay Regional Hospital after being mauled by dogs in St D’Acre, near Alexandria, on Sunday.

He has been identified as Mickele Allen of a St D’Acre address in St Ann.

The St Ann police, in confirming the incident, said the boy was sent to the shop by his grandmother, Linette Brown, around 1:30 p.m., to purchase items. On his way home, Mickele was attacked by a pack of dogs belonging to neighbours.

The police reported that he was bitten on the head, legs, arms, and back.

The five-year-old was later transported to hospital by ambulance, where he was admitted in serious condition.

Photos obtained by The Gleaner showed the little boy on the ground with his pants torn off, shirt soaked in blood, and torn flesh on his arm and head, where he appeared to have been bitten more severely.

Head of the St Ann police, Superintendent Carlos Russell, told The Gleaner that it was unclear who owned the dogs.

“Nobody can confirm who owns the dogs. I heard they are mongrels,” Russell said.

“We have to continue investigations to see if we can find out if anybody knows who owns these dogs,” he added.

Efforts by The Gleaner to get in touch with the boy’s relatives on Sunday were unsuccessful.

The incident comes even as the Government seeks to enact the Dogs (Liability for Attacks) Act 2020, which would make the owners of dogs criminally responsible for attacks.

Under the act, it is proposed that owners of dogs that attack and injure persons could be fined from $500,000 up to $3 million or face imprisonment for periods ranging from six months to 15 years.

The law would also shoulder dog owners with the responsibility of taking precautions to protect the public from their dogs.

Late last month, Justice Minister Delroy Chuck faced pushback from some parliamentarians that the proposed law’s treatment of the word ‘attack’ was too sweeping, implicating even non-physical harm, and threatened overreach.

That advocacy found favour with Jalil Dabdoub, president of the German Shepherd Club.

“It cannot be imposed in a manner in which the definition of the nexus of the crime is an attack. The word ‘attack’ is too broad,” said Dabdoub, who is also an executive member of the Jamaica Kennel Club.

He also lobbied for consideration of mitigating factors for civil and criminal liability, among them provocation.

For years, Jamaicans have been subjected to sporadic dog attacks in public places, with little or no help from the Dogs (Liability for Injuries By) Act of 1877. Under this act, dog owners could be charged and fined in the court based on the judge’s discretion.

However, after a pit bull attack on a female teacher last year, severely injuring her and leaving her hospitalised for an extended period, the Government moved earlier this year to repeal that legislation and tabled the Dogs (Liability for Attacks) Act 2020.

With the act still to be passed, the police would be unable to prosecute the owners, according to Russell, as the matter would have to be treated as a civil matter.