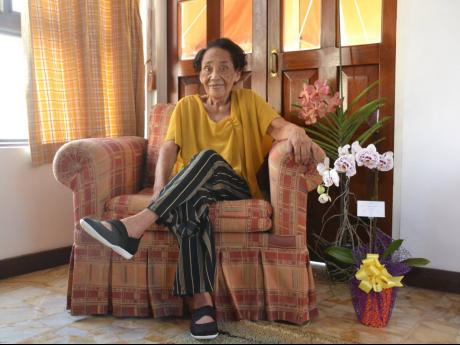 ERROL CROSBY/PHOTOGRAPHER
Curline Lyon has lived at both ends of a pandemic. 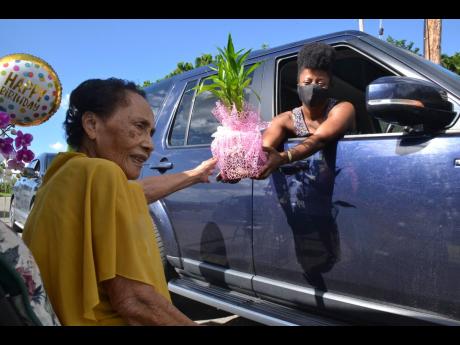 ERROL CROSBY/PHOTOGRAPHER
A gift-giver hands a present to Curline Lyon during a drive-through birthday celebration outside her Kingston home on Saturday. Lyon, whose family raves about her "legendary dumplings", turns 100 today, coming full circle to survive two of the most deadly pandemics - the flu and the new coronavirus. 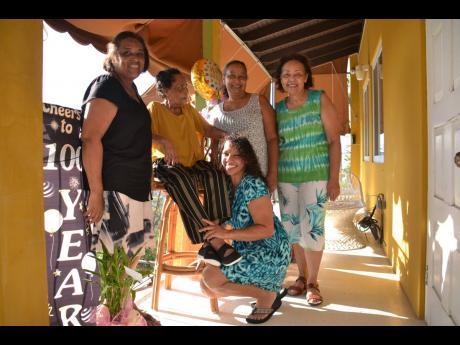 Curline Lyon, who is celebrating 100 years today, is still on a high from the drive-through birthday wishes she received last Saturday.

Dressed to the nines, Lyon’s children erected a tent at the gate for family and friends to pass by with showers of love and birthday wishes in honour of her years of care and sacrifice.

Margret Rhoden said that her mom, affectionately called ‘Miss Lou’, enjoyed it so much that the next morning she got up wondering if the experience had been real.

“She kept telling people about this dream she had and we spent the entire day telling her, ‘No, Mommy, it really happened,’” said Rhoden, recalling her mother’s excitement.

For her birthday last year, more than 30 family members gathered in Destin, Florida, and surprised her with 99 red balloons. The family aimed to surpass that in 2020, but their plan for an extravaganza was hijacked by the coronavirus pandemic and ill health.

Lyon was born towards the tail end of the worldwide flu outbreak that killed millions between 1918 and 1920. A century later, she has managed to survive another global plague.

Jamaica’s COVID-19 infections cleared 10,000 on Tuesday and deaths climbed by two to 233. The latest fatalities were of an 88-year-old woman from Kingston and St Andrew and a 90-year-old man from Westmoreland.

That reality has upended life for Lyon, whose advanced age makes her particularly vulnerable to the disease. More than 70 per cent of COVID-19 deaths have occurred among persons 60 years and older.

Despite this, Lyon remains in high spirits.

The centenarian beamed in anticipation of cutting her cake and celebrating with family virtually on Saturday.

Her three daughters, Rhoden, Joyce Kumar-Misir, and Maureen Lyon-John, have lauded her maternal instinct and unmatched commitment to the lives of her six grandchildren and three great-grandchildren.

Ms Lou, described as a quiet person who speaks very little about herself and childhood, shared precious memories with her grandchildren. Michelle Kumar-Misir said she grew to know more about her grandmother through rare storytelling moments.

“I don’t know if her father was in the war, but she started singing old war songs that told war stories,” she told The Gleaner.

Born in Lacovia, St Elizabeth, to a Jamaican mother and Chinese father, Lyon ventured into the family business of operating a haberdashery in the parish before moving to Kingston.

Branded an exceptional homemaker and chef, Lyon is well known for captivating tastebuds with her “legendary dumplings”.

One memory wrapped in nostalgia for the family is Saturday morning breakfasts with Miss Lou’s mouth-watering Johnny cakes.

In a moment of reflection having recovered from surgery when she was 99, Lyon said she was surprised to have lived to see a century, attributing her blessing to hard work and selflessness.