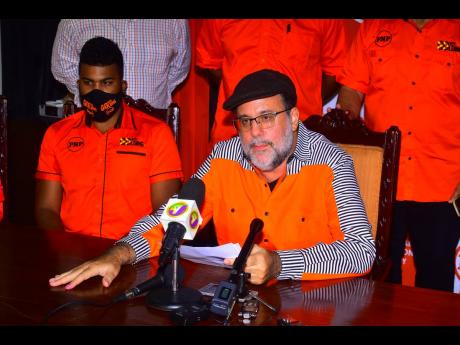 With factions in the opposition People’s National Party (PNP) at daggers drawn, newly elected President Mark Golding is urging Comrades to unite even as challengers declare their hand to take on his preferred candidates for two key party posts.

Golding has told Comrades to “respect the office of the presidency” while declaring that he is not an egotistical person and was not “here to big up myself”.

At centre of the latest controversy to erupt in the party are the positions of general secretary and chairman, which are being vacated.

Golding wants Dr Angela Brown Burke to become the party’s chairman and Dayton Campbell to be elevated to the position of general secretary. Both played key roles in Golding’s successful campaign for the presidency this month.

Despite Golding’s expressed preferences, former Deputy General Secretary Raymond Pryce has declared his intention to challenge Campbell for the post of general secretary. Phillip Paulwell is also aiming for the chairmanship of the 82-year-old political movement.

Some members of the party’s National Executive Council have accused Golding of trying to influence the body to rubber-stamp his choices for the two key posts.

“We all know that the party has been suffering from these little internal negative feelings – some of it going back some time, some of it more recent,” Golding said at a meeting of PNP councillors in St Catherine Eastern on Thursday night.

“Everybody in the party recognises that for us to regain the strength and power of the People’s National Party, we have to change that culture. That culture is a destructive culture, Comrades,” Golding stressed, adding that it was weakening the party’s standing in the eyes of the Jamaican people.

Golding said that he had to call a PNP supporter, who has been bashing him on social media, to tell her that she was hurting the party and not him.

“We are the ones who are holding ourselves back with the constant or past [poor] conduct,” the PNP president stressed.

“It will be a collaborative effort and I hope everybody will buy in to it. Nuh care how long it takes, we will do it, and the party will be stronger … ,” Golding stated.

Amid the fractures and a worn election machinery, Golding told the councillors that the party must be ready for the impending local government elections.

“We know it is not going to be an easy election for us because we’ve just come through a very difficult general election, but Comrades, the country is in a very bad way. COVID is on the land, the economy is suffering, business is suffering, employees are being laid off, unemployment is up over 50 per cent this calendar year,” he told them.