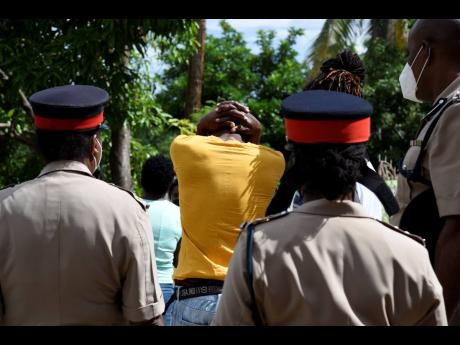 Nicholas Nunes/Photographer
The distressed father of Christina and Mishane McFarlane walks along with police personnel in Tryall Heights, St Catherine, on Monday. The girls and their grandmother, Iciline McFarlane, were killed by gunmen on Sunday. 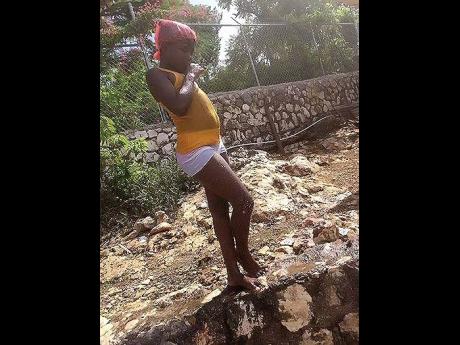 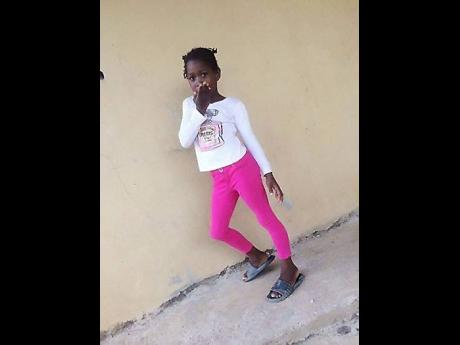 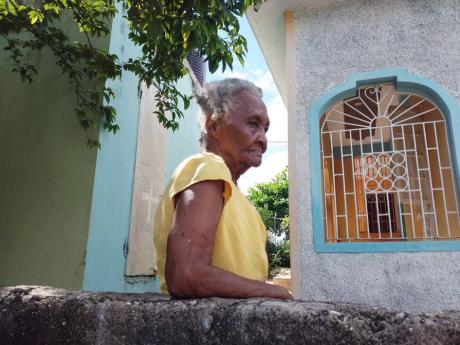 Photo by Jason Cross
Sylvia Stewart reflecting on the killing of her best friend, Iciline McFarlane.
1
2
3
4

On humid nights in Tryall Heights, 71-year-old Sylvia Stewart would often find respite by sleeping on her verandah, with even her back door left open.

Now she is deathly afraid.

Stewart is still rattled by the bloodbath that unfolded in Tryall Heights on Sunday which severed half a century of fond memories with her best friend, Iciline McFarlane.

The 81-year-old was killed execution-style in a vengeful attack that also claimed the lives of her granddaughters, Christina McFarlane, 10, and Mishane McFarlane, six.

Stewart fought back strong emotions on Monday as she recalled the terror that visited the St Catherine community.

The brutality of the attack is unusual in Tryall Heights, with such exhibitions of unbridled violence more familiar in other St Catherine neighbourhoods like Tredegar Park, Gravel Heights, and Lauriston, where bloodthirsty gangsters invoke fear through beheadings and mass killings.

The atmosphere on Monday was too morbid even for seasoned crime fighters like Assistant Commisioner of Police Gary Griffiths.

Head of the police Area Five and himself a father, Griffiths said he was personally devastated by the scale of the carnage.

“It is really gruesome. I have been to many scenes, but this one touches me to the core. The father exercised responsibility of both mother and father for the kids, and now they were killed,” said Griffiths, pointing to the girls’ clothes, washed by their dad on Saturday, that still hung on the line two days later.

“He doesn’t even have the strength to remove them.”

The assistant commissioner appealed to the community to desist from exacting revenge – a warning he hopes will ward off a series of reprisals that could worsen the crisis.

Griffiths said that detectives are on to good leads. But he had scathing condemnation for the murderers.

“It was almost like you killed three children, because that 81-year-old was almost back to being a child. I don’t see human beings operating like that. These are the works of animals without a conscience and heart,” Griffith told The Gleaner.

Up to Saturday night, Christina and Mishane had been playing with Stewart’s great-grandchild at her home.

Those priceless moments with the “bright and intelligent likkle girls” still fill Stewart’s heart with fondness.

Iciline McFarlane, who would have turned 82 on Boxing Day, always looked forward to preparing a meal of cow foot for that special occasion each year, Stewart remembers.

“Me and the grandmother who died were one of the first to live here in a board house, from bottle-lamp days. From 1971, me live here in one board room, and she live in board room, too ... .

“That lady was my friend. She was more than a sister to me,” Stewart told The Gleaner.

Meanwhile, residents in Tryall Heights are on tenterhooks, fearful that more violence will be unleashed in the community. After murdering the McFarlanes, the gunmen fired numerous rounds during their escape. Bullet-riddled walls farther down the road from the death house were exclamatory reminders of the deadly violence.

Murders in the St Catherine North Police Division have rocketed, year-on-year, by 35 per cent from 80 to 108 up to November 22. It is the second-bloodiest division in Jamaica, which has, all told, experienced a reduction in killings of almost two per cent.

A visiting workman in Tryall Heights struggled to compose himself on Monday and could hardly stand straight as he ordered his second glass of rum.

“Mi a stranger and a shop me come and can’t move, because the likkle girl weh me a talk to Saturday, a dead she dead. Mi shock and shake up, bredda,” the construction worker said.

“What can a 10-year-old do for you to put her on her knee and kill her execution style?” one resident asked.