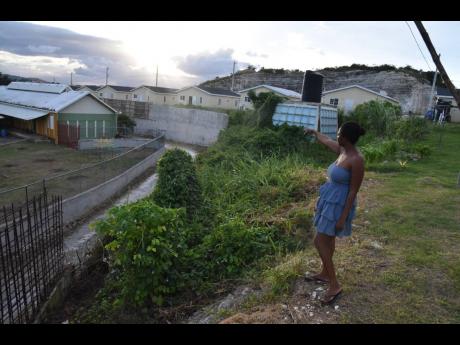 Photo by Kavarly Arnold
Derrio Johnson, president of the Green Pond Grove Citizens Association, stands in her backyard, pointing to the incomplete retaining wall that is one of the many complaints of the residents.

Stung by the public criticisms of disgruntled homeowners accusing the state agency of short-changing them, Housing Agency of Jamaica (HAJ) Chairman Norman Brown said residents of Green Pond Grove in St James will have the defects in their dwellings remedied in short order.

The residents have been venting their frustration via social media and other platforms, lamenting what they deemed to be substandard work on their houses and the failure of the HAJ to have the properties secured. They cited issues such as leaking roofs, termite infestation, missing retainer walls, and missing land boundary alignment.

Responding to complaints about multiple defects in almost all the 85 houses, Brown insisted in a radio interview that the HAJ was not at fault, intimating that the houses were turned over to the agency with the defects and that efforts are being made to address them.

“To be honest, I am struggling to answer the questions because when this board started to deal with the HAJ, these units were already constructed. Some of the defects, we wouldn’t have realised them until people started occupying the premises,” said Brown. “We couldn’t hold the contractors to account because [we] just didn’t know as yet. We did our inspection; however, something like roofing, we couldn’t tell at the time.”

According to Brown, the HAJ has funds in hand that were earmarked to be paid over to the contractor, but which will be retained by the agency to effect repairs.

“We have enough money there that any one of those roofs that need to be fixed, it will be fixed,” said Brown. “Some realignment (regarding property boundaries) was done by virtue of an easement of the water position. There was a resurvey done, and everything was brought back in compliance with the subdivision order.

“In regard to the excavated hillside, we will be taking corrective measures to nullify any danger that would exist there,” added Brown.

However, some residents are not taking any comfort in Brown’s words, adding that months of complaints have fallen on deaf ears.

“Some 90 per cent of the houses here have some form of defect. Those things should have been rectified … . Six months gone since a lot of us have been living here,” said Derrio Johnson, president of the Green Pond Grove Citizens’ Association.

“A lot of the issues that we are having, we would have pointed out when we came to inspect the house. I did so two years before I got my key. Everyone has the same story … . We came in to the same problems and were told [to give them] another six months, which has now passed,” she said.

Kemeisha Douglas, who was forced to take matters into her own hands and repair her roof to keep out the rains, is at her wits’ end.

“The roof did a leak and dem seh dem fix it, and see it deh, me have to get somebody to come and fix it,” she said.

“The wall structure nuh good. As mi nail the littlest a nail in the place, the wall a broke weh. It look like a just dust dem use in it. No cement nuh use inna my house at all … . If it collapse, me just hope nothing nuh do me and my pickney dem,” said Douglas.

With further rains threatening to add to the residents’ frustration, Brown had a team of workmen in the scheme working on defects over last week.

“I have asked the management of the HAJ to assign a special team so that things can be addressed. Our aim is for everyone to have their homes to their satisfaction, then we can close that chapter,” he said.