Charles: I’m not emasculated by Holness - Environment minister has no problem splitting oversight with PM 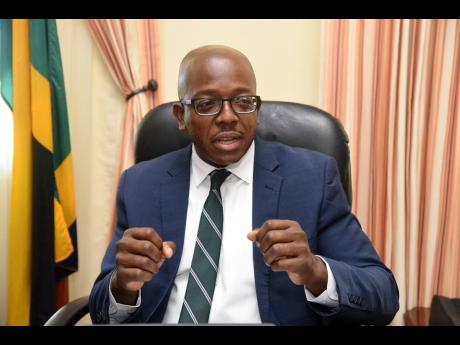 With the country’s key environmental regulatory body falling outside of his immediate control as minister with responsibility for the environment, Pearnel Charles Jr said he is not perturbed by the arrangement.

Charles, who is minister of housing, urban renewal, environment and climate change, said that he had no problem with the decision to place the National Environment and Planning Agency (NEPA) under the Ministry of Economic Growth and Job Creation, headed by Prime Minister Andrew Holness.

In a recent Gleaner interview, Charles was asked if he felt powerless in his capacity as environment minister as NEPA was not directly answerable to him.

“I appreciate that people want you as minister to have all agencies under you because you must have control of your agencies. That’s not what we are here for.

“We are here to work together and ensure that at whatever instance in the stages of growth, the best decisions are made,” Charles said.

He said that the prime minister took the time to “navigate and to decipher how best to achieve positive outcomes for the country and he has ultimate responsibility”.

NEPA’s role came under scrutiny recently after it was revealed weeks ago that the Holness administration had overruled the environmental regulator’s denial, in May, of a mining and quarrying permit in the Puerto Bueno Mountain. Holness’ then minister without portfolio, Leslie Campbell, overrode the decision in June.

Environmentalists have charged that the warehousing of NEPA under Holness’ watch was emblematic of the administration’s policy incoherence.

Charles, who has largely been silent on the evolving intrigue over the ecologically sensitive area, said he was not “thin-skinned” or “easily emasculated”, noting that he and the prime minister worked well together.

“My understanding is that he has structured his Government to achieve one goal – it is not a goal to make me feel good or to make himself feel good. It is to protect the assets of this country and to move the country forward for the best interest of the people,” he asserted.

Charles said he was in full agreement with the decision by Holness to place NEPA under Economic Growth and Job Creation, where the National Housing Trust is also domiciled.

“When there are issues with NHT, there is no difficulty with the Ministry of Housing working with NHT,” he said, adding that a similar approach would be taken with NEPA.

Charles said he believes that the prime minister was also giving new ministers like him the opportunity to prove themselves and to grow before saddling them with additional tasks.

Further, Charles reasoned that with four portfolio areas in this ministry, he had no difficulty sharing responsibility with the prime minister.