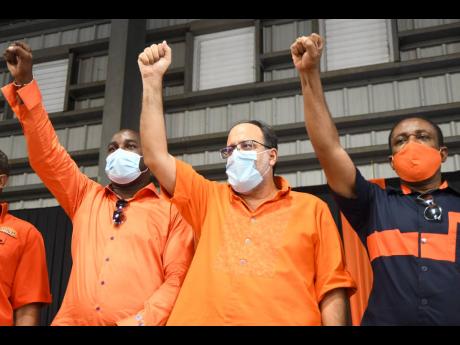 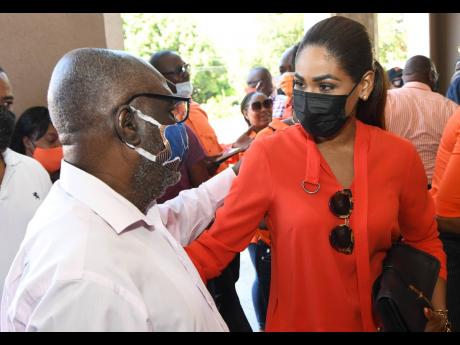 Rudolph Brown/Photographer
Lisa Hanna has a tete-a-tete with Oliver Clue at the PNP’s NEC meeting on Sunday. Clue was blamed by Hanna critic Damion Crawford for dooming his fortunes during his tenure as member of parliament for St Andrew East Rural. 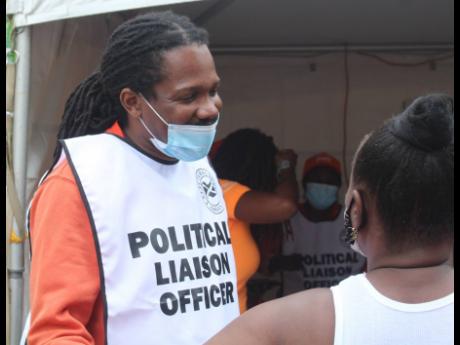 File
Damion Crawford, who had an oversight role in the November 7 presidential election which Mark Golding won.
1
2
3

Claiming to be more popular than Lisa Hanna, People’s National Party (PNP) firebrand Damion Crawford has ripped into President Mark Golding and suggested that he will launch a presidential bid in the next five years.

The outburst is bound to open a new frontier of division in the 82-year-old party which has been roiled by internecine conflict with two leadership challenges in 14 months. The pro-Golding faction will be stirred to crush the Crawford rebellion before further disunity mushrooms..

In a leaked voice note, a copy of which has been obtained by The Gleaner, Crawford also hinted that Golding is only good for the next two years.

“Mark is the most ready for the next two years. [General] election is not the next two years, and we can’t change [the leader] again. Nobody can come two years’ time and seh ‘we ready now’. Dem a go seh ‘Why yuh never ready from dem long time deh?’” Crawford said as he explained his five-year outlook.

Crawford, a vice-president of the party who has failed to score electoral victory since his first foray in representational politics, said that Golding was very capable but “the people are of the opinion seh we need a Andrew”.

“The people are of the opinion that we need somebody who can go up against Holness.”

The former St Andrew East Rural member of parliament, who was hounded out of the seat after he grew unpopular with interests there, believes, too, that Golding has inherited all of Peter Bunting’s enemies.

“The people dem nah go to a next Peter Phillips. Dem nah go try dah style deh. You see if a did Portia lose, dem woulda want a Mark, but you see [because] a Peter lose, dem want a Portia,” Crawford said.

The PNP senator, who contested the Portland Eastern by-election in April 2019 but lost to political rookie Ann-Marie Vaz, conceded that the PNP would be defeated in the upcoming local government elections, which have been pushed back because of the coronavirus pandemic.

The dreadlocked politician said he was of the opinion that Phillips should have settled for the loss of the local government elections “but he never agree”.

But Crawford, at the same time, touted that he was most committed to the party’s ideology and had the ability to pull the most support for the party, again downplaying Hanna’s popularity.

He said that Hanna has never got the cheers he has received at PNP meetings.

“She has never gotten the adoration weh me get amongst regular people. Never! Lisa Hanna nuh get the cheer weh Dayton [Campbell] get when him reach a wah PNP meeting,” Crawford said in the voice note.

“Lisa have a hundred camera a walk with har every day. Me walk without camera. Anything weh me a get, a weh people tek. She a train every day and she barely a edge me out. Den when me start wid three, wah go happen?”

“Lisa run delegate already, you know, and we nyam out har burger, you know!” Crawford said, suggesting she was not a delegate favourite.

Further, Crawford disclosed that a poll that had been commissioned in recent times but was not published showed that he was two points ahead of Hanna on the question of who should lead the party.

“Me tek a likkle snapshot and send it to two a me fren dem and seh, ‘We next,’” Crawford stated.