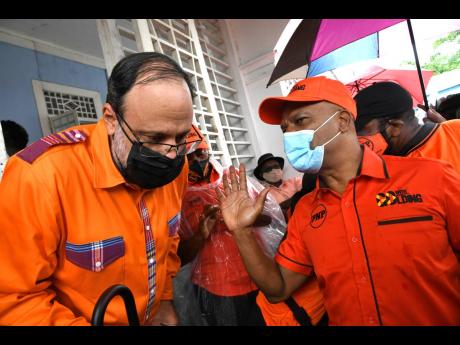 Opposition Leader Mark Golding has defended choosing Peter Bunting, the former Manchester Central member of parliament who launched a failed bid for the presidency of the People’s National Party (PNP) last year, to fill the vacant Senate seat on the Opposition benches.

Bunting, who lost the seat he held for three terms in the September general election, will be sworn in during tomorrow’s sitting of the Upper House.

He will also replace Donna Scott-Mottley as leader of opposition business in the Senate, The Gleaner understands.

Golding yesterday admitted that being a close associate of his played a factor in his selection of Bunting, adding that he was an experienced parliamentarian who was able to speak on a broad range of issues.

“I think it is a decision based on merit,” he stressed while making the disclosure on Radio Jamaica’s ‘Beyond the Headlines’.

In an immediate reaction to the announcement, Bunting’s allies said that they were pleased with his appointment.

“I am not sure about all of the things that Bunting will be able to do in this new position, but the man is a smart man, and PNP need good representation,” one Manchester Central constituent, who did not wish to be identified, told The Gleaner yesterday.

He said that Bunting’s loss in the general election was not a reflection of his abilities and that he was a good representation of the cohort of people needed to raise the PNP flag.

Mandeville division Councillor Jones Oliphant, who has worked alongside Bunting for years, told The Gleaner that Bunting’s achievements in and out of politics is testament to what he will be able to accomplish as a senator.

“I know he will champion the cause of integrity, respect, and security. I think he will develop motivation for human development. Based on what I have seen and working with him, these are strong areas, and we need to look at, especially at security for our citizens,” said Oliphant of the former security minister.

The councillor describes Bunting as a creative, “out-of-the-box thinker” whose presence is necessary in the Senate.