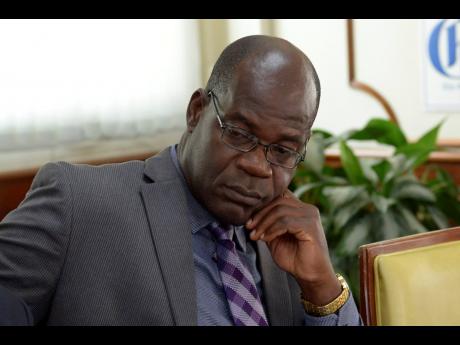 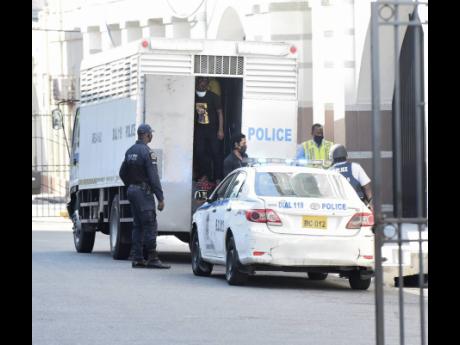 Ian Allen/Photographer
Detainees are escorted towards the Supreme Court building in Kingston on Wednesday. Uchence Wilson and eight of his cronies were sentenced for various crimes by Chief Justice Bryan Sykes.
1
2

Despite convicted gangster Uchence Wilson being slapped with a 26-year prison term, perceived lighter sentences for some of his eight cronies dishonour the memories of their victims, a senior Jamaican police officer has said.

The State signalled on Wednesday that it might pursue the crime lord’s ill-gotten gains, but Wilson appealed that his family was broke.

“All of this is because my girlfriend want to get back her car ... . She have di two kids and dem a suffer ... . I don’t have any money,” he said in court Wednesday.

Deputy Commissioner of Police Fitz Bailey disclosed to The Gleaner that he had mixed feelings about the efficacy of the anti-gang legislation following some sentences, as short as four years, imposed by Chief Justice Bryan Sykes.

While acknowledging that “we are not lawyers, we are not the judge”, Bailey could not hide his disappointment that the chief justice had not applied tougher sentences to what he deemed hardened badmen.

He has also questioned whether the anti-gang law, hailed by national-security experts as a game-changing weapon in the arsenal of the police and prosecutors, had sharp enough teeth.

Bailey said that he viewed the intent of the legislation as not only to uproot criminal organisations as a group, but to impose heavy sentences that would serve as a deterrent.

“If you look at the predicate offence for a firearm, if a person is held, they can be sentenced to 15 years,” Bailey said.

Wilson, 30, was convicted on 10 of 34 charges, which include robbery, illegal possession of firearm, and shooting with intent.

Bailey has been the authoritative figure in arresting several criminal outfits, with some cases falling through. Six members of the King Valley Gang were acquitted this year and 19 others in the Dexter Gang walked free in 2019.

While commending the efforts of investigators and the approach taken by the prosecution, he said that his team is prepared to learn hard lessons and tweak their strategy for future cases like the upcoming ones against the Clansman Gang.

“We will, maybe, look at where we need to make adjustments in our approach to the investigation, if there is a need for that to be done. I am still convinced that the officers ... did an excellent investigation where all the areas were exploited in terms of investigative opportunities,” Bailey said.

Cyberforensic communications and GPS mapping were among the strategies used.

Director of Public Prosecutions Paula Llewellyn also commended the industry of the investigators and prosecutors.

“There were a lot of challenges, especially out of court, which we will not go into given the nature and the type of matter,” Llewellyn told The Gleaner.

Bailey believes that the psychological toll on victims and their families should have greater influence in sentencing.

“I am a police officer and I am a real person who lives in this country, and the fact is, the victims of crime, do we consider them? Those persons who have suffered significantly?” said Bailey.

That chastening note could be more emphatic if Lloyd McFarlane, one of Wilson’s attorneys, rings true. He said that with good behaviour, his client could be out in 17 years.

The Uchence Wilson gang was busted in December 2017, three years after the Criminal Justice (Suppression of Criminal Organisations) Bill was passed.

* Odeen Smith – four years for robbery and being part of a criminal gang.

* Lanworth Geohagen – six years for robbery and being part of a criminal gang.

* Derron Taylor – eight years for being part of a criminal gang, home invasion, and facilitating a serious offence.

* Michael Lamonth – 16 years for robbery, home invasion, and being part of criminal gang.

* Sheldon Christian – five years for being a member of a criminal gang and facilitating a serious offence.

* Stephenson Bennett – five years for robbery and being a member of a criminal gang.

* Machel Goldburn – eight years for being a member of a gang and facilitating a criminal organisation with robbery.