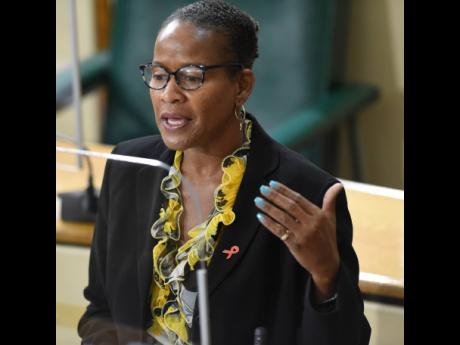 Ian Allen/Photographer
Senator Sherene Golding-Campbell making her debut presentation in the Senate on the Dogs (Liability for Attacks) Act yesterday.

The Senate yesterday passed the Dogs (Liability for Attacks) Act 2020, which will impose tough financial or custodial penalties on owners held responsible for their animals causing death or serious injury to a person.

The act was passed with 24 amendments in the Senate, which followed the 17 changes made in the House of Representatives on November 17 and replaces the 1877 Dogs (Liability for Injuries by) Act.

Where a dog attacks and causes death or serious injury to an individual in any place, other than the premises where the dog is kept or permitted to live or remain, Section 6 of the act makes owners liable to a fine or up to five years’ imprisonment.

If the owner is present and fails to take adequate steps to restrain the animal during the attack, they would be further penalised.

Opposition Senator Donna Scott-Mottley argued that in some cases, the owner might be terrified and traumatised to the extent that they are paralysed by fear and powerless to help. Their inaction, she insisted, would then not be motivated by malice or spite.

A sticking point for Opposition Senator Lambert Brown was that a section of the act could be abused by business operators, which could result in security guards, for example, being wrongfully convicted.

He said a section which exempted a person who had “contracted the other person to provide a security service using the dog” from liabilities could be misinterpreted to mean that the responsibility for the dog’s action was transferred to the handler at the time of the incident.

Leader of Government Business Kamina Johnson Smith said that the legislation would not allow security companies to extricate themselves from liability in incidents concerning dog-handling guards.
While urging security companies to include in guards' contracts explicit clauses on the accountability of employers, Johnson Smith said she could not commit to making that specific amendment to the dog-attack law. She said she would raise the matter with Justice Minister Delroy Chuck, but warned that such specific redrafting might open discourse on other excluded circumstances.

She, however, argued that Section 10 (3) – which permits a constable to ask a judge to issue a warrant to enter a premises to seize a dog – may prove impracticable, especially in rural Jamaica.

She argued for the addition of the term ‘justice of the peace’, since it would be much easier to find such a person as opposed to a parish judge to execute the warrant, especially late at night and in remote areas.

Dog owners are not without protection under the act, which the following circumstances being grounds for defence:

• The attack by the dog occurred in the defence against an offence (whether to person or property) being carried on by the individual attacked by the dog.

• The person was not the owner of the dog at the time of the attack.

• The individual attacked was trespassing or in a place where that individual was not authorised to be.

• The attack was caused by the deliberate provocation of the dog by the person attacked.

• The attack was by a dog being used by a constable, or other agent of the Government, in the lawful execution of the duties of the constable or other agent.

Editor's note: A previous version of this story said that Kamina Johnson Smith assured that the legislation would be reworded. In fact, she said she would raise considerations for an amendment with the minister of justice. We regret the error.