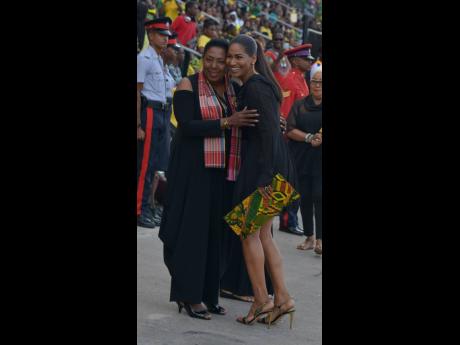 File
Culture Minister Olivia Grange (left) greets then opposition foreign affairs and foreign trade spokesperson, Lisa Hanna, at the 2018 Grand Gala at the National Stadium. The audit report said that there was no record the JCDC recovered the overpaid amount for Grange’s outfit after getting a 25 per cent discount on the original $25,000 cost price.

Almost a dozen employees of the Jamaica Cultural Development Commission (JCDC) have alleged intimidation from some senior officials and even board members since The Sunday Gleaner last week published a report on a leaked audit suggesting bad governance at the entity.

That development comes as lawmakers agreed last Thursday to invite the JCDC next month to explain its management of taxpayers’ money before Parliament’s Public Administration and Appropriations Committee.

“We were reminded by email about the Official Secrets Act and warned against speaking to media,” revealed two senior staffers on the reaction from management and the Olivia ‘Babsy’ Grange-led Ministry of Culture, Gender, Entertainment and Sport.

“The situation is bad and they want to hide it,” added the employees of the email from JCDC’s corporate services unit.

Two workers, who had agreed to speak with the newspaper on condition of anonymity, subsequently declined to speak.

None of the workers at the main government agency tasked with promoting Jamaican culture confirmed whether the officials reminded them of the country’s whistle-blower legislation, which Parliament approved in 2011 to encourage employees to make disclosures in the public’s interest.

The colonial inheritance that is the Official Secrets Act criminalises the divulgence of some information by civil servants, while the protected disclosures law encourages certain revelations.

Among the matters highlighted in the audit was the employment of Enid Harrow, Grange’s close associate, to a position which had duties already being performed by a staff member.

There were also concerns over contract payments before work completion, disregard for procurement processes, employment of contract workers without money in place, retired staff not getting their right pensions, a questionable $30-million transfer, among other things.

The audit manager, in the March 15, 2019 report to then interim Executive Director Daffodil Thompson, said concerns were raised that JCDC already had a protocol and guest relations coordinator and hospitality officer performing the same work Harrow was contracted to do.

The Sunday Gleaner obtained aspects Thompson’s response, which noted that Harrow was employed to strengthen the agency’s protocol systems.

Thompson also reportedly noted that the contract was not renewed after it ended, but it is not clear whether Harrow still works in any other capacity in the ministry.

Meanwhile, sources say Grange has reimbursed the JCDC for money the audit said was used to pay for a bandana dress for the 2018 Grand Gala at the National Stadium in St Andrew. The auditor’s concern was that despite a 25 per cent discount on the $25,500 cost, the full amount was paid, and at the time of the audit, there was no evidence that the overpayment had been recovered.

Explanations for a $30-million transfer the auditor said was done without the requisite approval have also trickled out of the JCDC, whose spokespersons remain mum despite questions sent to them by The Sunday Gleaner on November 25.

The auditor found that $30 million was transferred from the JCDC’s income-earning account to the block vote account, from which funds are used to pay bills and other expenses.

A transfer from one account to another requires written approval from the culture or finance ministry, said a culture ministry official.

“The amount was not approved by the parent ministry or the Ministry of Finance,” the report said, pointing to a September 27, 2018 email from the chair of the board’s finance committee approving the transfer of the funds.

“Investigations revealed that several areas (example, festival songs, etc) were significantly in excess of expenditure amounts, which went far above the budgeted amounts,” the report added.

That note is significant since the response to that finding from the management was reportedly that the JCDC, after clearing major expenses for September, such as wages, was left with $2 million to pay vendors for national celebrations between August and July 2018.

The amount in arrears was reportedly over $50 million and forms the basis for why some current staff want the auditor general to examine expenditure and contracts for national events such as the Reggae Month, Independence celebrations, grand galas and similar events hosted in western Jamaica stretching back to 2012.

In another response to the audit finding, the former interim executive chair said the issue relating to $2.4 million contracts for music videos not being signed or going through procurement process could not be rectified given the passage of time, but would not be allowed to repeat.

The Auditor General’s Department (AuGD), whose last report on JCDC was in 2010, declined to confirm whether it has expressed an interest in the latest issues.

“The department does not provide details relating to its audit schedule and/or specific details of the audit prior to its completion and the issuance of the report to the client,” the department told The Sunday Gleaner last week.

The AuGD’s 2011 audit had flagged “weaknesses in the areas of salary preparation, procurement of goods and services, management of fixed asset, cash management and the internal audit function”.

At last Monday’s Cabinet meeting, the culture minister and some JCDC board officials were invited to give an update on the state of affairs.

Some ministers were reportedly concerned that The Sunday Gleaner had published a report which the JCDC has claimed contains “inaccuracies”.

The JCDC has, however, refused to point out the findings which are inaccurate and provide evidence to the contrary.

Mexine Bisasor, who has retained her post as chairperson of a downsized board, had committed to responding to Sunday Gleaner questions last week, but nothing was forthcoming up to press time despite messages, telephone calls and emails.

The 15-member board reportedly held a meeting on Wednesday, where the issues raised in the audit were considered.

Several staff members said some of the issues such as the non-payment of increments, non-confirmation of persons in posts after years of acting, lack of staff evaluations and appraisals were corrected by Thompson before her contract expired in October.

They are making an urgent call to Grange to fix the outstanding issues and address the unstable leadership in key positions such as finance and human resource.

“People are just not being made permanent. It’s been a heavy reliance on consultants,” one employee said, noting that some colleagues have grown “demotivated and tired of calls from the ministry or board giving instructions, rather than inviting them to make meaningful contributions”.