Dream Team rebuilding Trench Town one house at a time 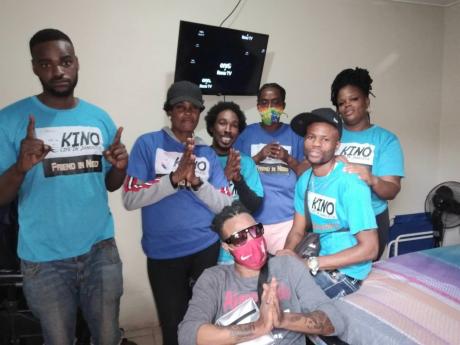 Photo by Jason Cross
Top photo: (From left) Dream Team members Tremayne Brown, Gloria Page, Oniel Elliott, Nichola Chambers, Latoya Wright and Akino Page pose with Donovan ‘Gin Gin’ Coburn (in front), inside the home they built for him. Coburn was the first recipient of a new home from the Kino Life in Jamaica programme. 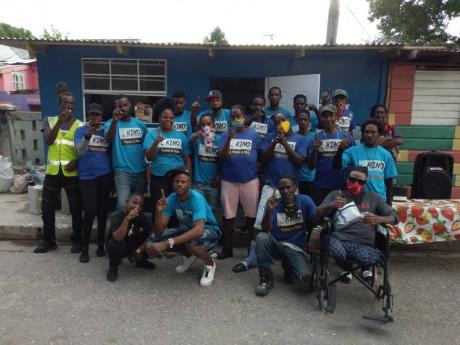 Photo by Jason Cross
Akino Page (stooping, second left) and most of the core members of the Dream Team pose for a photo last Friday outside their latests completed project, a ‘chef shop’ in Trench Town, St Andrew.
1
2

Donovan Coburn, a resident of Third Street in Trench Town, St Andrew, was at the wrong place at the wrong time when he was shot and paralysed at a football field in Waterhouse, St Andrew, 20 years ago.

After he was bitten by a centipede, he was told that his best option would be to amputate his legs.

The wheelchair-bound man, who had been living in a deplorable condition and lacking the most basic of amenities, has now had a change in fortune.

Six months ago, the founders of the Trench Town-based charity Kino Life in Jamaica (The Dream Team) spread the message to the community that they wanted to build Coburn a new house.

Akino Page took command and with the support of overseas donors and local volunteers, they managed to successfully pull off the project.

This has created a chain reaction, and one home at a time, the Dream Team is rebuilding Trench Town.

“I really give thanks and really appreciate wah everyone do fi mi,” Coburn told The Gleaner last Friday. “Right now, dem mek mi can live comfortable. My living condition was very poor. Kino came and saw it and said he needs to get me some help. The donors overseas really give me real help. Give thanks to everyone.”

One of the founding members of the team, Roy Facey, said the Dream Team was on a mission to transform and inspire Trench Town. His hope is for various factions in the community to look to Kino and the Dream Team as role models of what unity can bring.

“The love and bond we have for each other, we wish that it would spread across the community,” Facey said. “In each and every community, you have good and bad, but with the good wah we a do, we a try overshadow the bad. We need love. The infighting nuh necessary. We can be an example for the rest of them to follow.”

He said that helping to change people’s lives for the better had brought him great joy.

The team’s compelling power has drawn to it the likes of Tremayne Brown, the community hero who jumped into a gully with raging floodwaters to save a young boy being washed away 2017.

Brown’s role on the team is to transport the members from project to project and back home.

The team even has its designated chefs, and The Gleaner was on location last Friday to witness the ribbon-cutting for their newly renovated ‘chef shop’, from which hundreds – including volunteers, team members and other residents in the community – will be fed.

Page explained that the chef shop serves as a headquarters for the programme and had to be renovated as “this is where we eat and also cook and give the people in the community”.

“Everything we do is transparent,” he said of the programme. “People overseas watch our videos and help out the less fortunate. If we highlight anyone and they decide that that person is in need, dem send something towards dem condition and we present it on video so everyone can see it. It really gone huge from we start till now. We attract a lot of donors from Canada and the United Kingdom. Words can’t even explain the joy.”

Page said the work they are able to do has been fulfilling.

“We inspire a lot of these donors. A lot of them have the same heart like we, and wah fi do the same thing. Aunty Donna McGow inspire me a lot,” he said. “We realised we could bring out little positivity inna di community dem.

“The Government can’t do it all, so if we can come together and try fi help, then each one should help one.”