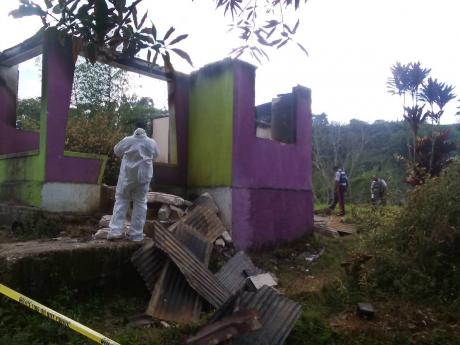 Photo by Hopeton Bucknor
Police personnel processing the scene at a burnt-out house in Wait-A-Bit, Trelawny, where the charred remains of two men, believed to be brothers, were discovered last Friday.

The Wait-A-Bit Police in Trelawny have commenced a full investigation surrounding the death of two men, whose bodies were removed from the rubble of a burnt-out, two-bedroom house in the community on Friday.

The police have so far confirmed the identity of only one of the victims. He is Denvil Brown, otherwise called ‘Ken’ or ‘English’, a mechanic of Green Town district, also in Wait-A-Bit. The other victim is believed to be his younger brother, a 27-year-old of All Side district.

Police reports are that shortly after 10 a.m. on Friday, residents saw fire coming from a section of the house and summoned the fire department.

On the arrival of the firemen, the house was seen engulfed in flames and all its contents completely destroyed.

Following cooling-down operations, the charred remains of the men were discovered among the rubble.

When The Gleaner visited the community on Saturday, a large crowd had converged at the scene.

A number of the residents said Brown was a known troublemaker and his death did not come as a surprise.

They surmised that Brown had got into a conflict with someone and had called his brother to come to his aid.

The residents believe that when the brother arrived on Thursday, they were trailed to the house and killed.

They said that Brown was originally from Christiana in Manchester, but moved back to the Green Town over a year ago after allegedly being in conflict with persons there.

“Him is a man who all go a prison already, and him mix up in a whole heap a wrongs,” a shopkeeper told The Gleaner. “At one point, we even hear seh him wen deh a foreign an dem deport him.”

Commanding officer in charge of Trelawny, Superintendent Kirk Ricketts, told The Gleaner that the police have launched an investigation into the death of the two individuals.

“At this stage, we would have found two skeletal remains, and we are awaiting a post-mortem examination to determine what would have led to the death of these individuals,” he said. “Also, at this stage, we have not ruled out foul play ... .”

Investigators from the Christiana Fire Station are also probing the origin of the blaze.