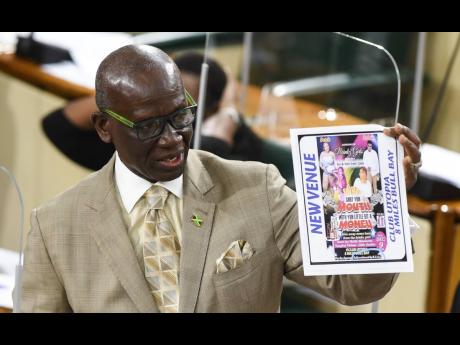 As Jamaica lurches towards 270 COVID-19 deaths, Local Government Minister Desmond McKenzie has again warned that party promoters who breach the Disaster Risk Management Act will be made to pay if found liable.

Speaking in the House of Representatives on Tuesday, McKenzie outlined several cases in which there has been outright disregard for established COVID-19 protocols.

McKenzie spoke of what he said was a major event held last weekend on Dunrobin Avenue where more than 150 motor vehicles lined both sides of the road.

The minister said that information garnered indicated that the activity was being closely monitored and that the police had been provided with the relevant footage to aid in an investigation.

McKenzie said that he was also aware of a trend by promotors to brazenly advertise events on social-media platforms in the hope of bypassing the authorities.

“What we have noticed is that information is being used on social pages on Facebook and other social-media platforms to promote these illegal activities,” McKenzie said, displaying at least two promotional flyers.

“That is the name of the event set for Club Utopia in Bull Bay, St Andrew (December 9). This is one of the flyers in total disregard for the Government and this information has been passed on to the police to prevent these illegal activities from going on,” McKenzie said.

The audacity of the promotors was laid bare as the minister indicated how daring they were, even suggesting on flyers that an event was “fully endorsed” by the Kingston & St Andrew Municipal Corporation.

The 17 beaches that were ordered closed in August will remain closed, McKenzie stated.

He said that in keeping with the order, the municipal corporations have not issued any permits for any event over the past four months.

But despite the non-issuance of permits, more than 300 events are being held weekly across the country in violation of the health and safety protocols laid down by the Ministry of Health & Wellness.

“We are aware of nightclubs, especially in the Corporate Area, Ocho Rios, Montego Bay, Negril and other major centres, are operating in defiance of the protocols. These venues registered as restaurants are now operating as nightclubs,” said McKenzie.