No Grand Market crackdown - With one eye on COVID, Kingston mayor says city will broker deal with vendors for Christmas 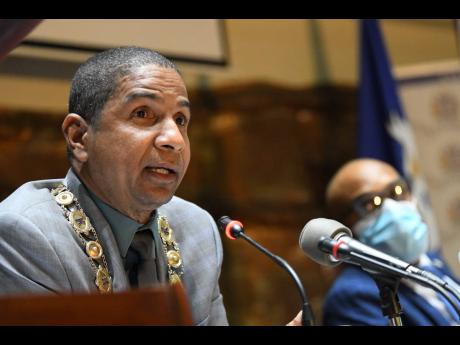 Rudolph Brown/Photographer
Mayor of Kingston Delroy Williams addresses the monthly meeting of the Kingston and St Andrew Municipal Corporation at the Jamaica Conference Centre on Tuesday. To his left is Robert Hill, CEO and town clerk.

Vendors and merchants in the downtown Kingston market district will apparently not face a similar Grand Market clampdown as has been announced for the western city, Montego Bay.

While committing to enforcing coronavirus health and safety protocols in the Jamaican capital, Kingston Mayor Delroy Williams said that the authorities would keep the city’s economy humming at the bookend of a year of collapsing job and financial fortunes.

“It is very important for the city because the economy of the city has to go on,” Williams told The Gleaner after the Kingston & St Andrew Municipal Corporation’s (KSAMC) meeting on Tuesday.

“The city life, in terms of economic activities, is necessary for the smooth functioning of the city, but at the same time we are in a different environment ... .”

Montego Bay Mayor Leeroy Williams faced protests on Monday as he insisted that the window for sales would not be allowed before 1 p.m. on Christmas Eve, or Grand Market day.

The KSAMC will be implementing traffic-control measures to manage the increase in hawking caused by seasonal vendors who throng the business district.

Delroy Williams said that municipal police have already been deployed to work alongside members of the Jamaica Constabulary Force to enforce COVID-19 guidelines.

The mayor said that he would be touring the downtown Kingston market district this week to make further recommendations to the administrative staff of the municipality and the central government.

Displacement caused by the coronavirus has caused an 18 per cent dip in market revenue for the KSAMC for the period April to September. The intake of $56 million fell short of the projected inflows of $69 million, acting Financial Officer Kevin Blair disclosed.

Curfew hours will run from 10 p.m. to 5 a.m. from December 1 to January 15, with the exception of Christmas Day and Boxing Day, for which the window will last from 7 p.m. to 5 a.m. Public and private gatherings should not exceed 15 persons.

The positivity rate for the first week in December was 8.3 per cent, surpassing the five per cent threshold outlined by the World Health Organization.