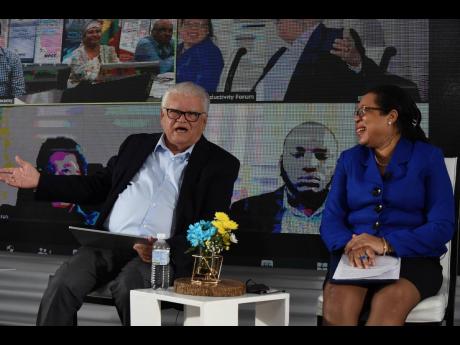 A senior research analyst at the Jamaica Productivity Centre (JPC) is pitching agriculture and agro-processing as the best option to move the country’s economy into a position of sustained growth.

Wendel Ivey told panellists at yesterday’s Jamaica Productivity Forum at the Spanish Court Hotel in New Kingston that research shows that agro-processing on its own can bring about increased production through automation.

He said in addition that while the agriculture sector employs roughly one-fifth of labour in Jamaica, the productivity was so low that any marginal increase of output per worker could boost the sector and influence the economy.

Agriculture contributes approximately seven per cent of the country’s GDP, a figure that climbs to about 12 per cent when value-added products are taken into account.

“So agro-processing as a solution will bring increased production through automation, and it will provide more sustainable optionsthat will reduce food wastage and improve portability of products. It also brings with it the resilience to climate change,” Ivey said.

Pointing to trends in productivity, he indicated that productivity growth has slowed markedly since the global financial crisis and it has stayed at that level since.

According to the JPC research, this was caused by declines in education, trade, and investment of capital as well as economic complexity – all of which have manifested themselves in the Jamaican context since the COVID-19 outbreak in March.

Ivey said that the pandemic has compounded the effects of these drivers on the shrinking economy and suggested that the implications include weaker investment and erosion in trade, capital, and the labour market.

He said that the Government was now focusing on certain areas to restore the economy.

“We have exchanged productivity in industry to quick cash, meaning that we are now focused as an economy on trade and, fortunately, the expansion of our services sector through tourism, the BPO and more whereas in the earlier years, we were truly adept at increasing production to produce goods for the domestic and export markets, converting what we produce in the hope of exporting same,” Samuda said.

That was the case in the garment and furniture industry, particularly in the 1980s.

According to the minister, more than 80 per cent of arable lands that are irrigable have no irrigation in place.

“We have fertile land, but we cannot irrigate it – not that we don’t have the water - but the cost of taking the water to the land and thereby enabling farmers to produce effectively and profitably, we don’t have.”

Samuda said that vast resources will be needed if the country is to move agriculture in the direction that it should go.

One country that Jamaica is often compared with in terms of size of its economy is Mauritius, but unlike Mauritius, which grew its economy by 3.6 per cent in 2019, Jamaica’s economic growth in 2019 was projected to be at 1.7 per cent by the IMF’s World Economic Outlook.

Driven by construction and services sector (banking, ICT) as well as strong agricultural outputs, Mauritius in July 2020 was classified for the first time as a high-income country by the World Bank.