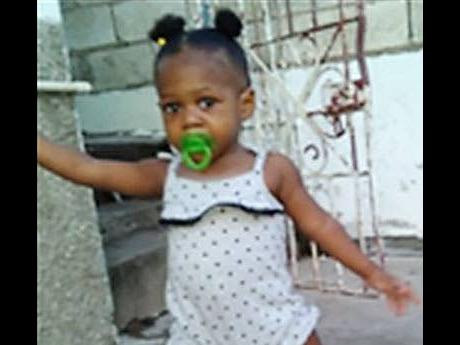 Detectives attached to the Barnett Street and Freeport police stations in Montego Bay are probing whether gunmen who snatched an 18-month-old infant from her mother’s arms on Monday are holding her at ransom to bait her father.

The child has been identified as Akelia Patten, otherwise called ‘Paris’, who is of James Hill, Clarendon, and Retirement, St James, addresses.

Akelia’s mother had received a telephone call to take her daughter to a health centre in downtown Montego Bay as her clinic appointment had been brought forward. Having left the centre, two men in a black Toyota Voxy minibus pulled up alongside her on Humber Avenue and wrestled the baby from the mother’s grasp about 10:30 a.m., sleuths close to the case told The Gleaner.

The 26-year-old mother was grilled about the whereabouts of the child’s father and warned that Akelia would be held until he made contact with them, The Gleaner has learnt.

The frightened woman rushed to the Barnett Street Police Station, where she filed a report on the incident.

“We can confirm the kidnapping of the child and also that she was taken away by men who are seeking her father. We are not able to release any more information at this time, except to say the child’s father is from Clarendon and that the investigation is at a delicate stage,” a police officer said late Wednesday afternoon. He requested that his identity be withheld because he was not authorised to divulge details of the case.

The police are asking members of the public who may be able to assist them in their investigations to contact the Barnett Street Police Station at 876-952-2333, police emergency 119, or the nearest police station.

The kidnapped child is of brown complexion, medium build, and about 2ft 6ins tall. She also has a milk spot on her upper lip.