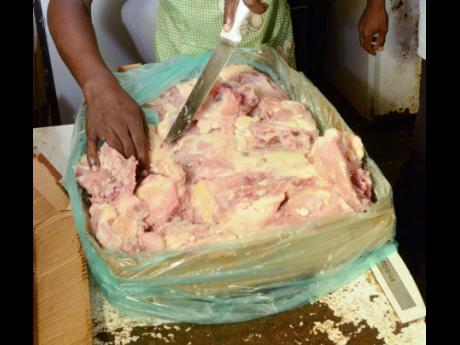 File
The Integrity Commission has turned the spotlight on an absence of transparency in the permit process for chicken back and neck imports.

Major Jamaican chicken producers are pressing the Government for 100 per cent inspection of all poultry imports in the wake of a damning report by the Integrity Commission citing fraud, duty evasion, and a permit process that lacks integrity and facilitates corruption.

Some importers have been accused of blending in leg quarters among shipments of chicken back and neck to escape combined tariffs for premium parts that reportedly amount to as much as 240 per cent. Chicken neck and back are lower-grade parts that are consumed in huge volumes among Jamaica’s poorest households.

The duty differential is believed to be the driving force behind a well-orchestrated conspiracy of cheating the Treasury of millions of dollars in taxes.

The Integrity Commission has recommended that the Ministry of Agriculture and Fisheries immediately stop the issuance of chicken back and neck import permits under current arrangements.

Dave Fairman, vice-president of Jamaica Broilers, one of the two major poultry producers in the island, suggested that rogue interests have tapped systemic corruption in an unlevel playing field.

“When you hear that only five per cent of the containers are being inspected, it begs a question because in the importation of competing products, we are supposed to be making it harder for people, just as other countries do,” said Fairman, hinting at a culture of protectionism as a buffer to a flood of imports.

“Instead, we are facilitating clearing of the containers. You don’t inspect them, and you know there is this history.”

Jamaica imported more than 1.36 million kilograms of chicken neck and back for the month of October, according to the United States Department of Agriculture, compared to just over 403,600 kilos of leg quarters for the same month.

Chicken meat trading is big business in Jamaica, with the appetite for the protein flying to record highs in a coronavirus-crushed economy that may have forced consumers to avoid pricier options like chevon, beef, pork, and oxtail.

Corporate affairs manager at Caribbean Broilers Group, Dr Keith Amiel, said the levels of importation were unnecessary because of the amount of chicken meat currently on the market.

“We have given about 500,000 baby chicks to small farmers to grow, and it’s all now in for Christmas - over three million kilograms a week,” he told The Gleaner on Wednesday.

“We have not produced so much chicken as we have produced in these three weeks.”

Agriculture ministers have relented to intense lobbying from import traders in an industry that has offered rich pecking for persistent beaks.

Then Agriculture Minister Karl Samuda said in 2016 that he had not “not been confronted with more requests for anything than I have been for ... chicken neck and back”.

As pressure mounted on the Government for a response to the Integrity Commission report, current portfolio minister Floyd Green flatly refused to comment when pressed at a handover of supplies to fisherfolk in Old Harbour Bay on Wednesday.

Speaking earlier at a post-Cabinet press briefing, State Minister for Information Robert Morgan said that the Government needed time to examine the recommendations of the Integrity Commission “so that we can make adjustments where necessary”.

Responding to queries about the findings of the report, which was tabled in Parliament on Tuesday, Morgan said that the agriculture minister should be given some time to peruse the document before making comment.

“We respect the opinions of the Integrity Commission, and we acknowledge their important role in encouraging transparency, accountability, and probity,” Morgan said.

“Also, you will realise that it is a new minister. He is going in, he is making changes, he is looking at the systems, so I think we should give him an opportunity and give the Government an opportunity to assess the report in detail to look at the systems and practices to see how they are functioning ... .”

Fairman argued that the current importation system does significant damage to the local industry, which cannot compete on price with products coming out of North America.

“It dislocates small farmers and the industry in general, and in our whole drive and thrust for food security and a reduction in the food import bill and efforts to become self-sufficient, we have to go beyond that hurdle of the neck and back,” Fairman told The Gleaner on Wednesday.

“We have to wean ourselves off it over time.”

He has advocated that the permit system be overhauled to prevent it being the playground of a tight-knit cabal.

But Fairman’s appeal may be viewed as an attempt by poultry’s Big Two to keep their vice-grip on the market, thus feathering their nests. It is agreed economic orthodoxy that protectionism drives up prices and hurts the poor.

The Integrity Commission lashed the ministry for giving preferential treatment to applicants on the basis of prior importation history and suggested that the integrity of the award process was compromised and hindered competition.