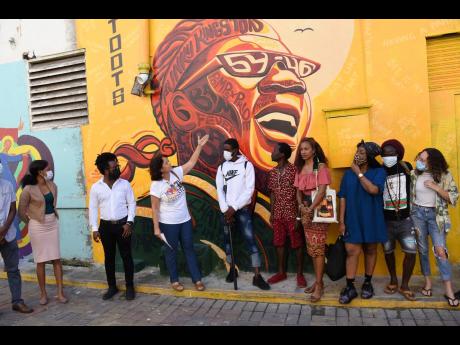 Prime Minister Andrew Holness has lamented that too few businesses have taken up the incentive to invest in downtown Kingston, under the urban development incentive programme in place.

Addressing the reopening ceremony of Scotiabank Centre at the corner of Duke and Port Royal streets in Kingston on Tuesday, Holness said there is a need to spark new interest in redevelopment of properties in the blighted Jamaican capital.

“As I travel through downtown Kingston and I look at the buildings and the facilities, there is no question that there is so much potential here … in the properties here, but the incentives have not been taken up ... .

“The property holders, some have, but many have not reinvested in the area,” Holness said.

In 2010, the Government approved a tax-incentive programme for downtown Kingston, geared towards stimulating development in the southeastern Jamaica city.

Investors will receive a tax credit of 33.3 per cent on capital expenditure in respect of improvement works carried out in the area. Investors will also benefit from stamp duty and transfer tax on the acquisition of land for use.

The prime minister said that the Government, through the Urban Development Corporation, is leading several projects in the downtown area.

As an example, the prime minister disclosed that, in a few days, there will be a launch for a new pipeline for Spanish Town Road, connecting communities near central Kingston.

Holness, in the meantime, commended Scotiabank for the work done to refurbish its headquarters, saying it was in alignment with the Government’s strategy of redeveloping the city.

“The reopening of your flagship branch at the Scotiabank Centre is a forward-thinking, progressive move by Scotia. The approach taken in reimaging, so that the design blends traditional and digital banking services, is groundbreaking,” he added.