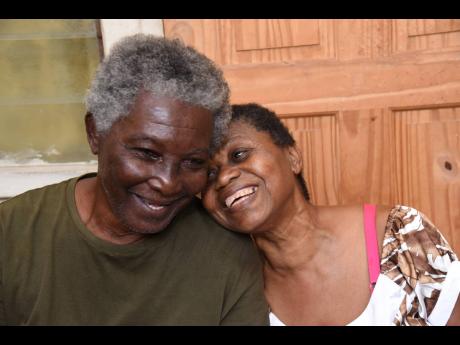 Ian Allen/Photographer
Visually impaired couple Clinton and Lorna Stewart enjoying each other’s company at their rented home in Cockburn Gardens in St Andrew. They are appealing for help to complete their house in Portmore, St Catherine.

Married for 29 years after sweeping Lorna Stewart off her feet in the late 1970s, retired district constable Clinton George Stewart has placed assistance to complete their home at this year’s wish list for the couple, who are both visually impaired.

Clinton, 68, and Lorna, 63, currently reside in Cockburn Gardens in St Andrew at a premises they rented for $8,000 per month after not being able to finish construction of their Portmore home in St Catherine.

Currently five months behind on their rent, the couple say that, were it not for occasional help from the Hunt’s Bay police in St Andrew, and other Good Samaritans, finding food would be a daunting task.

A former member of the Jamaica Constabulary Force, Clinton, who described himself as a ruthless district constable, told The Gleaner on Wednesday that their current situation was embarrassing.

The house they started in Portmore had reached up to “beam stage”, but they were not able to go any further. They are hoping that, in the season of goodwill, they will get assistance to put on a roof and make other minor finishing touches.

“We would like to be in our own place. The rent we are paying here can pay light bill and water rate and also put food on the table,” Clinton said. “I would love assistance to finish the house in Grange Lane.”

Clinton, who retired three years ago, has happy memories of his days as a district constable assigned to stations such as Hunt’s Bay, Seaview Gardens and Olympic Gardens in St Andrew, where he would encourage young people from many crime-plagued communities to trod the right path.

He complained, however, that he is yet to receive his pension and that his life and financial situation has been difficult because of it.

“The work was nice until me retire, but the people dem weh supposed to deal wid mi finances, dem nah deal right. Me retire the 16th of February, 2017 and, up to now, the only thing mi affi live off of is the likkle National Insurance Scheme. I don’t even know what the problem is. I would like them to hurry up, so I can get my pension to do what I need to do,” he said. “I have to be depending on my children fi help me out, and sometimes friends, brothers and sisters. We have to be scraping around. Our living condition is very uncomfortable.

“[Hunt’s Bay] help us out a lot. Christmas gone, they carried things for us like gifts, food and meat. They never forget us. Towards the rent, they try to help us in every way they can,” he added.

Clinton said that, having lost his sight a few years ago, it has been a drastic change.

“A man like me that is a police, who could see and do all kind of things, go around knowing people, doing things for people, working for my country and working with the society. It is kinda embarrassing to me not being able to see. Things and people I knew, I can’t see them again,” he said, adding that the COVID-19 pandemic has made life more challenging.

Despite the struggle, he still is able to find comfort and joy in his marriage. He loves his wife, Lorna, who boasted that, though she has been visually impaired for roughly 20 years from diabetes, and Clinton, within the past five, they are able to cook together, wash together and share other chores around the house.

“I have seen a side of him that no one has ever seen. He can be a teddy bear as well, and that is the reason why I love him. That’s how it all began,” she beamed.