‘Why almost two decades later?’ - Washington’s motive questioned in strike against cops; Gov’t in limbo over future of US-sanctioned lawmen still in force 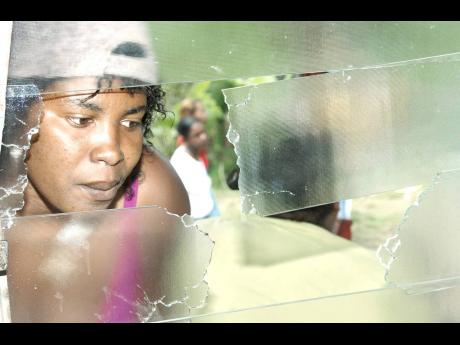 File
File A few days after the incident, a friend of the family looks through one of the windows allegedly shattered by police bullets at the home of Angella Richards in Kraal, Clarendon, where four persons were killed by the police on May 7, 2003. 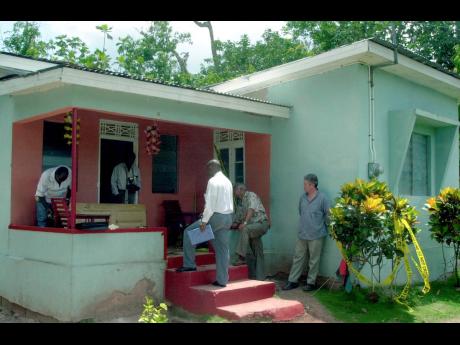 File
File Detectives removing furniture and other pieces of evidence from the death house in Kraal, Clarendon, on June 3, 2003, a month after cops killed four people there. 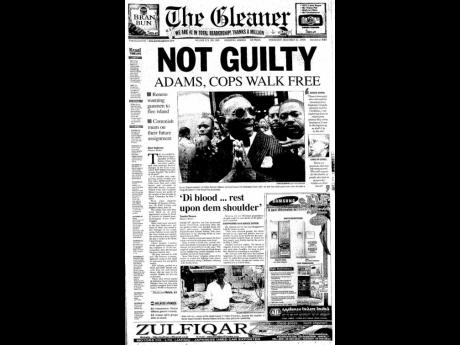 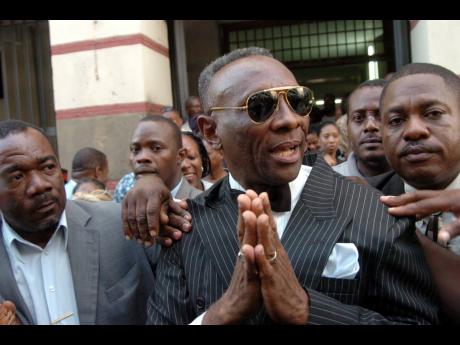 File
Senior Superintendent Reneto Adams expressing relief after he was freed in the Kraal murder case in December 2005.
1
2
3
4

Jamaica’s national security establishment is now grappling with how to deal with four serving policemen who have been sanctioned by a “hypocritical” lame-duck Trump administration for alleged “gross violations in human rights”.

“I’m searching and trying to understand why now; why almost two decades later,” a senior official in the Holness administration said of the US imposing the entry block and other sanctions on the six men and their immediate families over the 2003 incident in Kraal, Clarendon, that left four civilians dead.

“Visas are cancelled all the time, but we’ve hardly ever seen something quite like this where the law is invoked. It must mean something. What? Should current officers in the JCF (Jamaica Constabulary Force) and the army be worried if they are linked to any other controversial shootings?”

One of the cops is connected to the so-called police death squad cases regarding alleged extrajudicial killings investigated and initiated in 2014 by the then Terrence Williams-led Independent Commission of Investigations (INDECOM).

Williams, who demitted office as INDECOM commissioner in July, was one of the prosecutors in the Kraal case. The six cops charged in the matter were freed.

The Antony Anderson-led Jamaica Constabulary Force (JCF) has declined to speak on the news which came last Thursday from the US State Department to mark International Human Rights Day.

“The JCF does not have a comment at this time,” said Senior Superintendent Stephanie Lindsay, who heads the JCF’s communications unit.

The legislation allows the Trump administration to freeze the assets of persons and their families and prevent them from travelling to the US.

“The United States values our close partnership with the Jamaican government and people, and today’s actions underscore our support for human rights and our commitment to promoting accountability,” added the statement from Secretary of State Mike Pompeo, the same day the US executed Brandon Bernard, 40, in the first such federal case during a presidential transition in more than a century and despite alleged violations by trial prosecutors.

The Kraal incident was a major flashpoint for long-standing views of police excesses, especially through formations like the CMU, which was part of state response to rising crime and violence.

The cops were acquitted in December 2005 following a trial in the Supreme Court, which is why some national security officials say they have been left “confused” by the US action since local judicial proceedings were pursued.

“The matter has been adjudicated in our courts. Due process was followed. I’m a little sceptical of the US,” asserted a former JCF intelligence official. “If the US is so interested in justice, then why not put forward any new evidence that has been unearthed?”

The US Embassy in Kingston did not tell The Sunday Gleaner why they were only just taking action, although noting that the decision was built on “credible information”.

It also did not confirm whether other police or army personnel were under consideration for sanctions over cases of alleged extrajudicial killings connected to high-profile cases such as the 2010 Tivoli operation and the related Keith Clarke incident.

Up to press time, there were no responses to questions sought from National Security Minister Dr Horace Chang on the implications for US funding of national security programmes which would include the serving members.

The US, Canada, the United Kingdom, and the European Union are key funders of national-security reform and typically tie support to human-rights actions.

“The US would not act if something was not afoot or a signal was not being sent to, perhaps, even more senior ranks in the forces or even in Government. In other words, this is merely the means to an end,” said a senior official of the State Department, who said it was unlikely that a Biden administration would lift the designation given the human-rights sensitivities.

Public Defender Arlene Harrison Henry backed away from the issue, declaring that it was “not a part of my jurisdiction” as the action was undertaken by an alien state.

Human-rights lobby Jamaicans for Justice (JFJ) said “it was not in a position to comment” when contacted on Friday.

Dr Carolyn Gomes, who was JFJ’s executive director at the time, said she’s “bewildered” by the timing of the sanction, leaving her to wonder what factors drove the Trump administration, in the throes of a contentious presidential transition, to take action now.

“We remember all the challenges of that trial and the fact that it was brought to an abrupt end without the testimony of Danhai Williams, one week before he had to appear in court, … but the justice system spoke,” she said.

Despite being called to testify, Williams never appeared at the trial as his lawyer said his client would be forced to lie if he had testified.

Gomes said Jamaican authorities should ask Washington why the decision was taken now even as she questions the moral standing of the Trump administration.

“This Trump administration, which has paid so little attention – in fact, no attention at all – to the issues of the justice system and racial inequality in the US should be the ones making this designation? It smacks of a fair amount of hypocrisy, but they are within their rights to do what they want to do,” the lobbyist argued.

Gomes said that the commissioner will have to break his silence on the status of the cops still in the force.

“One wonders how the serving members under this sanction would interact with their counterparts on operations, which occur all the time, between agents of the US and members of the JCF,” she said, noting that the issue of police excesses remains a significant problem for the security forces.

Although the JCF has declined to comment, The Sunday Gleaner understands that at least four of the named men are still serving in the force.

Gordon, a sergeant based in the Clarendon Police Division, is on interdiction, confirmed Senior Superintendent Glenford Miller, who heads the parish.

He is among three cops charged in one of the death squad cases out of Clarendon.

Bernard was stationed in St James but transferred out of the parish after he and five other cops were acquitted in 2019 of corruption charge.

Williams, the former INDECOM commissioner, said the agency, during his 10-year tenure, did not have an input in the US consideration, and neither was he approached since he left office.

A lesson for Jamaica, he said, is the need to strengthen systems to treat with misconduct in the police and army.

“We have a false binary in that it is either they are acquitted or they are convicted – acquitted, good; convicted, bad. Unless you have a robust internal disciplinary system in the police force and in the military, you are left to only rely on the criminal courts,” he said.

The Jamaica Police Federation, which represents the interests of cops up to the rank of inspector, has rapped the US for disregarding the local court process which exonerated the cops.

James said a committee is to meet later this week over the matter.

“I believe it is a slap in the face for our judicial system. … we believe that the United States needs to be respectful of our sovereignty,” he told our newsroom on Friday.

‘Where is the evidence?’

Adams, who retired in 2008, has lashed the United States for the sanction which he argued has come without any new information being put forward.

“Where is the evidence?” he asked, arguing that the US action is part of efforts to warn Jamaica to be careful of its growing closeness with China.

“The US is not happy with our relationship with China and they want to punish us to send a strong message to the Jamaican Government that ‘if you don’t pull up your socks and get out of bed with the Chinese, your time is coming also for severe sanction and punishment’.

“We were arrested and charged. We went to the highest court in the land and were acquitted and remember this matter was investigated, not by Jamaican police; it was investigated by Scotland Yard who took their expert witnesses here. So, we could not have corrupted the system.”

Scotland Yard refers to London’s Metropolitan Police, from which senior officers used to be seconded to Jamaica to improve local police capacity.

Adams explained that between 2005 and 2006, the US cancelled his visa, which he later got back around 2015. He has travelled to the US with his family as recently as 2018, the year his latest visa expired.

Adams declined to say whether any member of his immediate family currently lives in the US.

“I don’t want to divulge that,” he told The Sunday Gleaner, noting that he does not anticipate any negative impact on his private security company.

The CMU joined a long list of squads over the years including the 1970s Echo Squad, the Ranger and Eradication squads of the 1980s and Operation Kingfish, tasked with providing special operational response in targeting some of the most feared and violent criminals.

Pressure from citizens, rights advocates and international partners over their deadly confrontations persisted and led to a major overhaul that culminated in the disbanding of the Mobile Reserve.

Forty-five-year-old Angella Richards, 38-year-old Ferris Lewena Thompson, Matthew James and a man known only as ‘Renegade’ were killed on Tuesday, May 7, 2003, according to police, during a shoot-out with members of the CMU.

The police said the shoot-out took place in their hunt for eight men wanted for their role in an alleged extortion racket on the owners of a now-abandoned gold mine in the Kraal community.