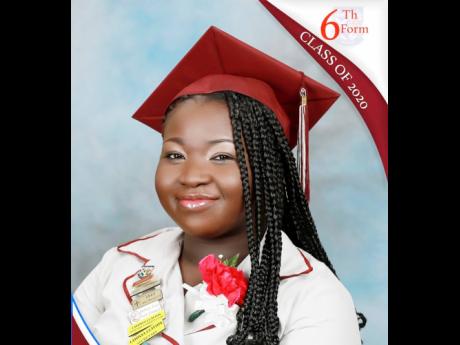 Christmas has come early for ace student Latonya Clayton, who was one of 30 Jamaicans to be honoured on Sunday during the Prime Minister’s National Youth Awards for Excellence.

Clayton, an alumna of St Andrew High School for Girls, was awarded for academic excellence after notching outstanding performances in the Caribbean Advanced Proficiency Examination (CAPE) and the Caribbean Secondary Examination Certificate (CSEC).

“I feel proud! I also feel surprised because I wasn’t even expecting the nomination,” said Clayton, a gem in the gritty community of Olympic Gardens, located in Prime Minister Andrew Holness’ St Andrew West Central constituency.

“I also feel like hard work really does pay off ... . You can actually feel the fruits of the labour.”

Clayton is now reading for a bachelor’s in sociology at The University of the West West Indies (UWI), Mona.

Academic distinction has been a hallmark of Clayton, who turns 20 on January 5.

In CSEC, she scored nine grade ones, with straight A profiles, placing second in the Caribbean and first in Jamaica for religious education. She also placed fourth among Jamaicans in mathematics.

And for CAPE, Clayton recorded five ones with straight A profiles.

She said she was particularly proud of her success in sociology – receiving the highest grade in the Caribbean – because she has aspirations to lecture in that field.

“I also placed fourth in the region and third in Jamaica for entrepreneurship. I basically had to juggle those subjects but also do well in school with leadership positions and all of those things.

“It was a combination of those things that got me the award,” the teenager said.

Clayton credits family support as being key to her success – something on which she will seek to draw more inspiration to accomplish a 4.0 grade point average in her first year at The UWI. Like hundreds of thousands of students across Jamaica, she has had to readjust to the challenges of online learning amid the pandemic, which caused the shuttering of schools in March.

However, flexible timetables have made the learning curve easier, she said.

She has words of wisdom and encouragement for children, especially girls. Clayton’s advice is simple but profound: Keep your head straight and remain focused.

The teen acknowledges that access to technology has complicated learning modes and outcomes but is hopeful that Jamaican youths step up to the plate.

“We must still put our best foot forward, work with what we have, and believe in ourselves that we can do our best, not just in schoolwork, but in all spheres,” she said.