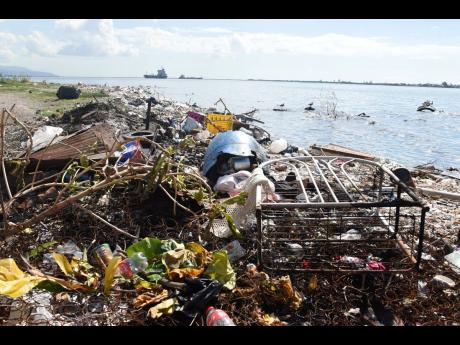 Kenyon Hemans/Photographer
A section of the Rae Town fishing beach is seen covered with garbage yesterday. Pollution has caused a decline in the amount of fish they have been able to catch in the area. 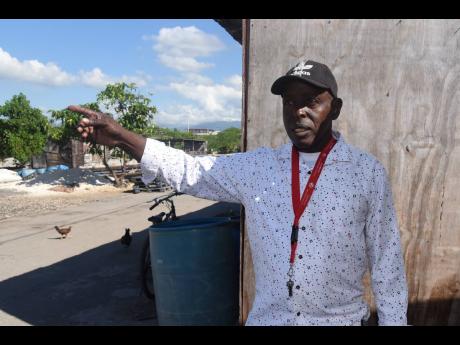 Kenyon Hemans/Photographer
Right: Winston Monroe, chairman of the Greenwich Town Fisherfolk Benevolent Society in Kingston, says there won’t be many smiles around the village for Christmas. 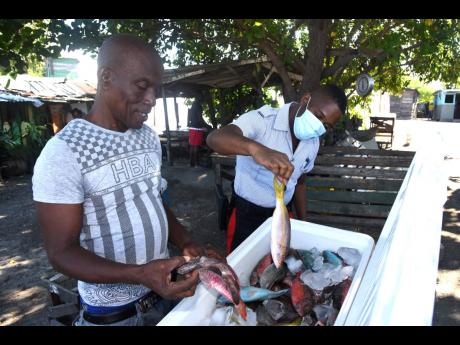 Kenyon Hemans/Photographer
Delroy Peddler assists Constable Bennett in puchasing fish at the Greenwich Town Fishing Village in Kingston yesterday. Peddler says that since the COVID-19 outbreak, there has been a dramatic decline in buyers at the fishing village.
1
2
3

It’s just over a week before Christmas Day and fisherfolk along the Kingston Harbour are not feeling very merry. There is little fish to catch due to the large volume of garbage and silt washed down by recent heavy rains.

In addition, it has been a rough year overall due to the COVID-19 pandemic and hopes for a customary buzz through the fishing villages and a Christmas bump in catch and sales are quickly fading.

Winston Monroe, chairman of the Greenwich Town Fisherfolk Benevolent Society, said that this could be the worst Christmas they have ever had.

He said that the more than 250 fishers, vendors, scalers and pickers at the Greenwich Town Fishing Village are struggling.

“The rainfall last month or so made it all but impossible for fishing, and it’s just barely coming back, but with just a mere week and a half before Christmas, I don’t see the sector rebounding that quickly to put a smile of these people’s faces,” Monroe said.

Monroe said that fishers had been grappling with the fallout from COVID-19 and the weeks of rainfall during October and November that drove away the fish stock, leaving boat captains in a quandary. Many sought to sail further out at sea for a meaningful catch.

“Fisherfolk really got some battering this year – COVID, the rains that brought down silt and dirt, not to mention the garbage that made it impossible to fish. The most we can hope for is a better 2021,” Monroe said.

Delroy Fiddler, a boat owner and fisherman, was attending to his first and, as he puts it, maybe his “only customer for the day”.

He, too, was weary of the state of affairs this Christmas.

“Fish sale is at its worse in a long time. We not getting any sale and it is hurting many of us because we not making any money, but we still have to go sea, which means we have to mend our nets and buy gas for the boat. Things really scaly right now,” said Fiddler.

Fellow boat owner Patricia ‘Patsy’ Sterling-Charlton said she cannot remember the last time she has had a good catch.

She said that even so, the boat goes out to sea every day in the hope of hitting it big before Christmas, although the likelihood is fading fast.

A similar cry is echoing from the Rae Town Fishing Village.

Derrick Evans, who has been fishing for 32 years, told The Gleaner that the Kingston Harbour is overfished and that the rains brought “pure misery”.

“The fish ting in a de holiday, it’s sticky. We are not catching anything. Is only yellowtail alone dem a catch, and is far out at sea dem going to catch a few fish,” he said.

“Not even one buyer we see from me come in this morning. The little [fish] we have, we have to put dem pon ice,” continued Evans.

“It’s really bad, man. Is pure mud covering the reefs, enuh. Garbage plenty out there still and the pollution is real. How then can we catch good-size fish under these circumstances?” he asked.