Reformed convict gives insight into ‘life and danger’ of underworld 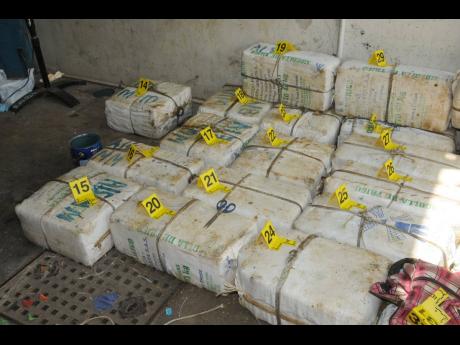 He walked away from the game after being convicted in the United States for drug-running, but news of Jamaican drug busts like the one at the Norman Manley International Airport (NMIA) two weeks ago, brings back a deadly nostalgia Mr B is all too familiar with.

For decades, Mr B had been running a deadly operation in the United States and Jamaica, recruiting and exploiting fellow countrymen, especially females – the expendable “prostitutes” – into a trade teeming with greed and betrayal. And it is not hard, he said, to persuade the most vulnerable from their slums on to a plane, drugs tucked inside their body cavities.

“If you use one and they get caught, you just use another one, because the drug lord knows it is a chance game. No matter how carefully planned it was, he is prepared to lose the shipment, but he won’t stop. There is always a way,” said Mr B, who during his 20-year-run has smuggled and distributed drugs into the US for some of Mexico’s deadliest drug barons.

Miami and New York were among his favourite stomping turfs, especially when Jamaican drug “posses” revolutionised the brutality competition back in the 1980s.

Looking for someone else to use

Some of these elder players, Mr B said, are still involved in the game, though the ruthlessness might have subsided because of increased attention and policy changes, particularly in the US over the years. Some things remain the same, however.

“To start an operation, you approach a possible transporter. You are basically a womaniser, and, as a womaniser, you are looking someone else to use. So you might know someone at the airport or an associate might know a candidate that you will approach and share the plan of the operation with,” Mr B told this newspaper last week.

“When you are recruiting, you focus on how much money that person can make or the house or car that they can buy. You talk to them about how they can change their families’ lives, but you never mention the risk of getting caught,” continued Mr B, matter-of-factly.

According to the former baron, there are different ways of getting the drug on the aircraft undetected, including the use of fire trucks and other service vehicles.

“I don’t know if that system still works, but the drugs would go out on the fire trucks that all have access to the tarmac. You can also get it on by the person who takes on the food or the person that takes off the garbage. Sometimes, it is done by the handlers of the luggage. Either way, prior arrangement would have been made,” he explained.

“That is 611 pounds of the gold,” he said, referencing the NMIA bust two Thursdays ago. “That amount means that it is not the first these folks would have taken drugs through Norman Manley. They would have tested the system several times before sending that quantity of drugs, and $2 billion worth must have involved someone big in the country – somebody untouchable.

“There is a drug lord involved with that amount of drugs, but there is also someone of prominence here in Jamaica that is able to facilitate so much drugs coming on Jamaican shores,” Mr B told The Sunday Gleaner. “The drug lord would not take that kind of a risk [without a high-level facilitator].”

He said, once the drug mule arrives in the US, there is usually someone waiting to pick them up and collect the contraband. Usually, they are immediately taken to a location to pass out drugs in their stool or have them physically removed from their body cavities.

A drug operation comes with meticulous planning, he continued. A ‘hook-up man’ would have approached persons at the airport, enticed them with niceties and the promise of financial freedom. These are just the lower men, he explained, who have to make up their mind to sacrifice everything if caught. There is no assistance by higher up if nabbed, he stressed.

“Frankly, the man with the drugs in the car at the airport is simply a casualty. He is on his own. By the time people know what has happened, the drug lord would be looking to find another channel, whether Sangster International or a boat. His business cannot be stopped.

“They will just soon reorganise their network, because there are several persons at the airport, at strategic points, that would have to be involved based on the calibre and amount of drugs,” he explained.

Mr B, however, is not proud of his past. He admits that he may have destroyed many lives while out on the street pushing drugs for a stranger from another land. But all he could see at the time was the betterment of his life, regardless of the many deaths and danger around him.

“I wanted to fulfil my dream – buying a car or a house and afford all that my family needed, and that was not possible with a regular nine-to-five. I was based in the US and my connection was through Mexico. We would drive to Pampano Beach in Florida and he (drug lord) would send men to pick them up to take them across the US.”

He told The Sunday Gleaner that he worked across more than a dozen states and recruited several Jamaicans already in the US to participate in the trade.

“Everyone who agrees to participate understands that, if they are caught, they are on their own,” he stressed. “No one is forced. They get enough money to agree to that. That is just the business.”

He added: “If you go to Florida, Philadelphia, and anywhere from Georgia all the way up to Boston, that is where you find the Jamaicans, the cash flow, the heavy money – the life and the danger.”