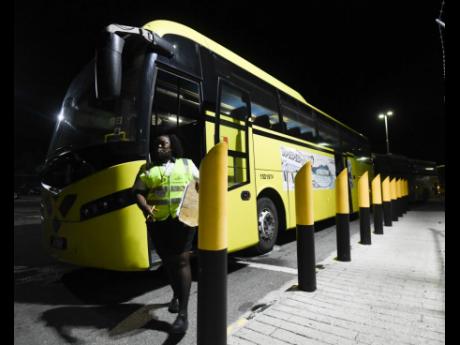 Ricardo Makyn/Chief Photo Editor
A security guard walks past one of several Jamaica Urban Transit Company buses deployed to transport travellers from the United Kingdom to quarantine in St Ann.

Jamaica’s travel ban against flights from the United Kingdom (UK) caught off guard a number of persons who expected to pick up relatives but left disappointed as hundreds of passengers were shuttled off to St Ann under 48-hour state quarantine Monday evening.

Though the travel ban became effective close to noon Monday, the Government allowed landing privileges for the flight, which was already en route to Jamaica and scheduled to arrive shortly after 5 p.m. EST.

Some persons who turned up at Norman Manley International Airport were seemingly surprised that their relatives did not emerge, discovering afterwards that they would be housed at a hotel in Ocho Rios.

Jamaica joined a growing list of countries to implement a ban on flights from the UK because of a new, more transmissible strain of the new coronavirus.

Minister without Portfolio Matthew Samuda told The Gleaner Monday evening that the 302 persons would be transported to quarantine facilities where they would be tested and allowed to go home if they returned negative results. Geofencing technology will be imposed to track their movement to ensure adherence to quarantine regulations.

British citizen Winston Brown, who chatted up a relative as he waited to board a flight to England Monday evening, expressed concern that he would be heading into a danger zone, with the UK registering above two million coronavirus cases and more than 67,000 deaths.

Brown said he had no choice but to head back home because he was required to report for his job.

“The feeling I have is sort of an in-between. I don’t want to go but I have to go,” he told The Gleaner.

A man who gave his name only as Jackson said he was anxious to know about accommodation plans for his mother. He eventually received a call from her after she borrowed a fellow passenger’s phone and informed him that she would be heading to Ocho Rios. She is slated to spend a month in Jamaica.

“I am really disappointed at the situation but mi understand. Me know seh she good still,” Jackson said.

He expressed concern, however, that the group was swarmed by security personnel and that his mom was exhausted from the nine-hour flight and the current coronavirus crisis.

There were also anxious moments for a man and a woman who declined to disclose their identities.

The man said that the Jamaican authorities should have ordered that the flight return with the passengers instead of accommodating them in such uncertain conditions.

His female companion was miffed about the sudden turn of events. She was banking on receiving Christmas goodies from the UK.

“Dem did a bring something fi we, you know, and the hottest thing is that a charter we charter taxi and we have to pay the taxi man,” she fumed.