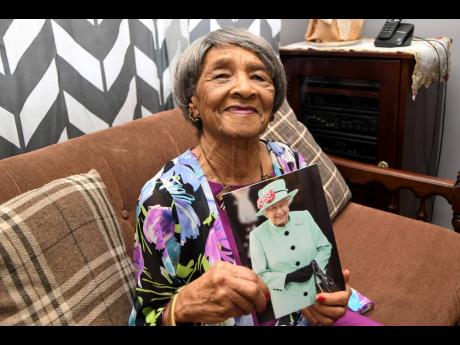 Rudolph Brown/Photgrapher
Elsie Smikle shows off a congratulatory card she received from the Queen last year as she ­celebrated her 100th­ ­birthday. 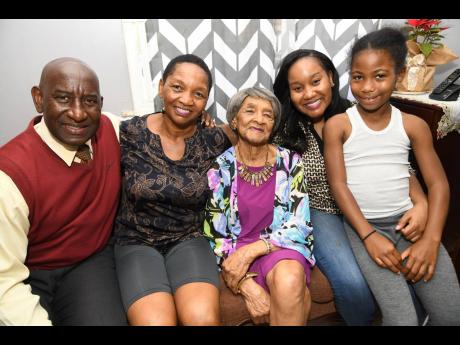 ‘Tom bwoy’ Elsie Smikle is proud of the moment she bowled legendary West Indies cricketer George Headley in a pick-up game in her formative years living in Contrivance district in Walderston, Manchester.

Back then, cricket was par for the course for her.

She told The Gleaner that she was so good at cricket that the men in the community gave her the nickname ‘Batspar’ because of her ability to play the game well and with a strong arm and prowess.

“You ever hear ‘bout George Headley?” she asked.

“Me bowl him clean. Me bowl George Headley, the cricketer, ova ball ground when him come fi play against a certain team,” boasted Smikle, with a warm smile that pulls you into her universe.

Although she celebrates her birthday on December 24 annually, Miss Elsie, as she is fondly called, was born on November 22, 1919.

The misadventure, as was common practice in those days locally, was a result of children not born in hospitals and parents taking their time to register the birth. It took Elsie’s grandfather, Angus Griffiths, a month to register her birth.

One of her daughters, Diane Petgrave, explained: “All these years, we didn’t have a copy of a birth certificate for her, so when one of her granddaughters wanted to give her a trip overseas and they needed to get her a passport, over 20 years ago, we went to the RGD office in Spanish Town.”

She said that when they paid a man for an ‘express’ service and gave him Miss Elsie’s particulars, he returned with a stamped certificate that seemed authentic and it was used to acquire the passport and visa.

Years later, the need to get a copy of the new birth certificate stunned the entire family. It was revealed via a search that her actual date of birth was November 22.

“What struck me that this was the real birth paper is the fact that the person who supplied the registration information was noted to be Angus Griffiths, her grandfather. It seems that that when we first went to get a copy, those people who got it for us created one ... . It was bandooloo business and we never know.

“So the date she has been celebrating as her birthday is actually the date on which she was registered, and by the time we found that out, it was too late to tell her to change, so we kept the December celebrations going,” Petgrave said.

Today, Christmas Eve, Miss Elsie is celebrating her 101st birthday with family in Kingston’s Stadium Gardens, and she made it known that she intends to go on even longer, bringing joy and a warm smile to the hearts of her loved ones.

“One year has passed by, and I’m coming up to another year again. Me nah dead now, enuh, so nuh even think me a dead now because I don’t feel ‘deadish’,” the sprightly centenarian said when asked how she planned to spend her birthday.

It was an example of her readiness to engage with others, a trait Petgrave said has endeared her to others.

Miss Elsie credits her strong faith in God and her humble approach to life to the foundation laid by her grandparents, who instilled in her the value of hard work, honesty, and politeness, which has served as the cornerstone principles of her life.

While she remembers going through varying degrees of poverty as a child, Miss Elsie said that she never went hungry although things got more difficult when her grandparents passed and she was forced to give up formal education.

The centenarian spoke with relish about her youthful days when she would roast birds and play cricket with the boys and men of the community, utilising the kende ball as the ‘windball’ was too expensive.

“We used to mek we kende to play, and that was how we grow,” she said.

Although she only attended the Mizpah Elementary School for a short while, Miss Elsie taught herself how to read and write and was an active member of the Moravian Church.

She would listen to teachers imploring students learn to spell as she lived next door to the school house but could not attend school because her family was so poor.

On becoming a “woman”, Miss Elsie worked as a domestic helper and babysitter for quite a while to ensure that her own 10 children – six girls and four boys – were raised as best as she could afford.

Miss Elsie lived through Jamaica’s first major tuberculosis outbreak in the 1930s. Called ‘consumption’, the illness ravaged several communities across the island, with sufferers isolated in poorhouses and hospitals, with special medical facilities set up to deal with the more advanced cases.

She described that period as one of horror and likened it to the current COVID-19 pandemic now taking a toll on the world.

“The germs was everywhere and it was like a cold, and if you come here, I could easily get it, and you don’t have to touch the person to catch it either,” she said.

The centenarian attributes her longevity to keeping active, eating healthily, and trusting in the Lord, having lived through several major world events, including World War II, the cholera and tuberculosis outbreaks, and Jamaica’s Independence celebrations.