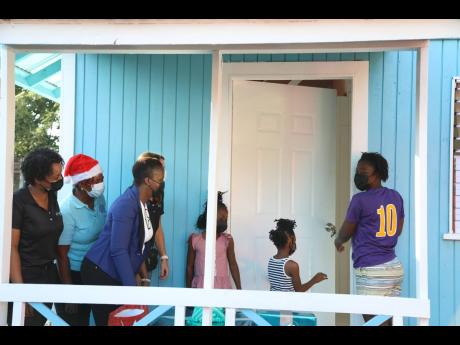 Sharon Roache, a young woman who has lived a life of pain and struggles, is dancing to Jingle Bells this Christmas.

That’s because she finally had her prayers answered when Active Home Centre and Food For the Poor stepped in to build her a new home for the holidays.

The two-bedroom house, complete with a living room, kitchen, and bathroom, was handed over on Tuesday, December 22, to the elated 29-year-old former ward of the State.

“I am overjoyed and can’t explain the feelings right now,” said Roache, who has two daughters, in an interview at the building site two weeks before the keys were handed over to her.

“I can finally take a real shower now!” she exclaimed as she recalled the one-room structure she shared with her two daughters in one of St Catherine’s inner cities.

Susan Melbourne Townsend, marketing manager at Active Home Centre, said the company was moved to respond when it heard of Sharon’s story.

“It’s been pure joy constructing this new home that they so greatly deserve. From start to finish, they were onsite eagerly giving a hand wherever they could even though we had more than enough staff volunteers,” said Melbourne Townsend.

Abandoned by her parents

With no steady job because of illness, and paying rent of $3,500 for a one-room structure, Roache said that she prayed hard to overcome life’s difficulties.

Roache, who was abandoned by her parents and left in the care of house mothers at the Maxfield Park Children’s Home in St Andrew, was kept at the facility past the usual age because she struggled with epilepsy. She finally had to leave the place she called home at the age of 21 when she got pregnant with her first child.

Her new home is now upgraded with ceramic floor tiles throughout, a tiled shower, with a pedestal sink, and a beautiful kitchen. The staff at Active also donated food, clothing, toys, a tablet, and cash to the family.

“Thanks, Father God! I pray every day (as) without Him, nothing would be possible,” said Roache.

She broke down in tears when she started to talk about the lack of support from the father of her two adoring girls, one seven and the other three.

She vowed never to abandon her two children “because they are the only family I have”.

Kivette Silvera, executive director of Food For the Poor, said the charity organisation was happy to help.

Roach is one of more than 30 recipients to have received a home since the organisation’s ‘Tan A Yuh Yaad’ launch to curtail the coronavirus infection.