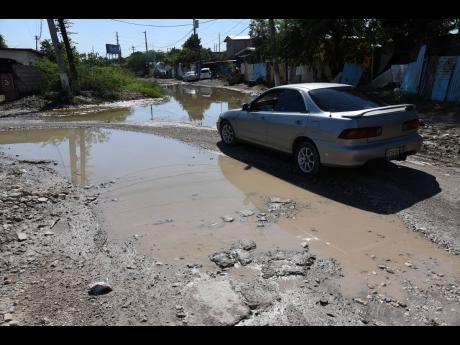 Ian Allen/Photographer
A motorist navigates a still-flooded section of Riverside Drive in New Haven, St Andrew, two months after heavy rains caused the Duhaney River to overflow its banks and flood homes in the area. 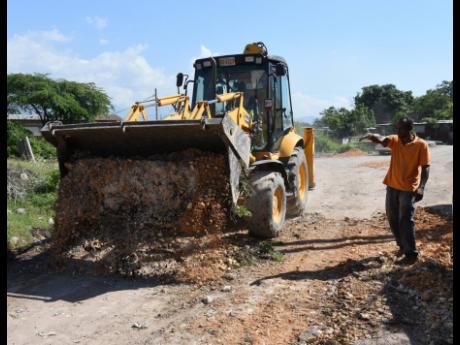 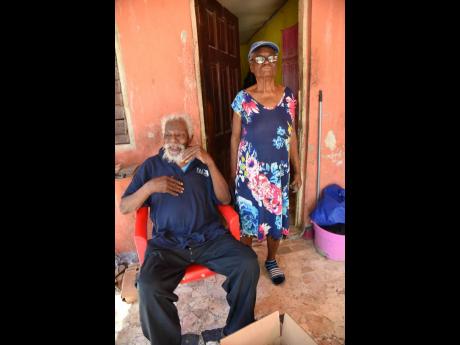 Ian Allen/Photographer
Noel and Gloria Hamilton lost furniture, clothing items and other possessions in the October flood, which, coupled with the COVID-19 pandemic, has ruined Christmas for them.
1
2
3

A month ago, their homes were flooded with mud, debris and filth after heavy rains caused the Duhaney River to overflow its banks. Now, residents of New Haven, a hard-pressed area off Mandela Highway in St Andrew, are facing a different battle – mosquitoes.

They are the nightly pests that now plague the community as floodwaters recede leaving debris, puddles of sewage and a ravenous battle between ‘ticky-ticky’ fish and mosquito eggs.

Residents are trapped in the duel as the Government makes a piecemeal of a drainage plan to tackle the New Haven flooding situation, charged Norman Perry, councillor for Duhaney Park, within which New Haven falls.

“A comprehensive plan for the rehabilitation of the drainage system for New Haven was developed under the instruction of Portia Simpson Miller from 2007. It was ready just before that administration left office,” he charged.

“Now, you have another party that is in power and it may not be a part of their priority. In many communities across the length and breadth of Jamaica, you will find that there are many plans that are sitting down awaiting funding and there is little you can do outside of your member of parliament making representation ..., but it all comes down to funding,” said Hall, adding that work on the sewerage system has started in sections of the community.

“My party is not in power and so the Government will have its priorities,” the People’s National Party-aligned councillor continued.

“What you must understand is that with the flood damage across the island, COVID-19, and the downturn in the economy, there are going to be reasons to make excuses that the funds are not there,” he argued.

O’Neil Hall, vice-president of the New Haven Riverside Gardens Citizens’ Association, said the mosquito problem in the flood-prone community is long-standing and a health risk.

“We always have mosquito problems, and as you can see, part of it is because we don’t have proper drainage. So flu, dengue and those diseases affect us, especially the children,” said Hall, who oversaw a Christmas roadwork initiative last Thursday.

“The river has swamped out a whole section of the community and we keep dumping that section. So when we see the trucks passing with old broken-up material, we take it and come and dump it down here. That is how we try to raise the land and also get rid of the mosquitoes,” he explained.

Flooding from heavy rain and repeated dumping of the area have turned once-recognisable roadways into dirt tracks.

Riverside Drive, Queensborough Avenue, Emerson and Duhaney Terrace are among a few of the communities where residents were affected by floods in October this year as the island was impacted by a number of weather systems, including Hurricane Eta.

Many residents were left without a place to stay as their homes were either still inaccessible days after the prolonged rains had ended or had been extensively damaged by the flood.

“New Haven is one of the most peaceful communities. It is one of the best around here when you talk about crime; but when it come on to infrastructure, it is one of the worst,” noted Michael Kelly, questioning the late commencement of government Christmas work in the area.

Now, they count furniture and clothing among damaged items as floodwaters rushed from the roadway through their home earlier this year.

“This is my favourite one – the slippers – because my foot is not so good, but all of them get destroyed in the flood – clothes, furniture, everything,” he said, pointing to appliances outside.

That flood and the COVID-19 restrictions have all but ruined Christmas for them, but the new year could be promising if business picks up quickly at their shop, reasoned Noel.

In the meantime, Councillor Perry said that residents have been getting assistance from the Red Cross, Food For The Poor, and the Kingston and St Andrew Municipal Corporation, among others, as they try to rebound from the disaster. He said that more care packages are to be made available after the Christmas season.