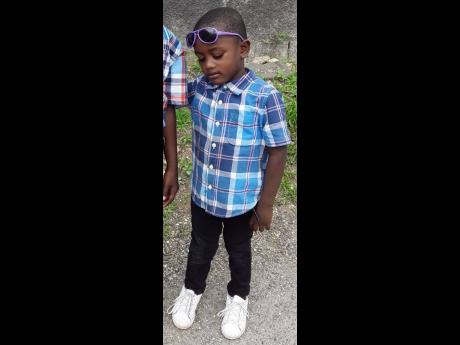 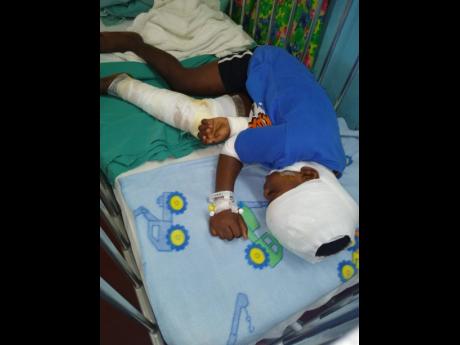 Five-year-old Carson Lattibeaudiere, who was severely bitten by a dog, was admitted to the Bustamante Hospital for Children. 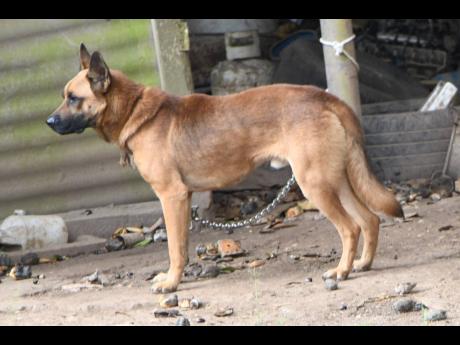 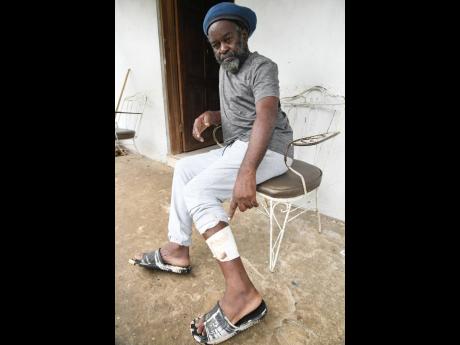 Rudolph Brown/Photographer
Milton Bonner, Carson Lattibeaudiere's grandfather, was also attacked by the dog when he tried to rescue his grandson.
1
2
3
4

Tuesday, December 22, 2020, was supposed to be an ordinary clean-up day for Milton Bonner and his grandchildren at their home in Mannings Hill district, St Andrew, but instead, they experienced a frightening and horrific event. His five-year-old grandson, Carson Lattibeaudiere, was attacked and badly bitten by a dog belonging to a relative.

During the scary scene, which unfolded around noon, Bonner held on to the dog after it had attacked Lattibeaudiere, and as a result, was himself bitten three inches deep, on one of his legs. The dog then continued its pursuit of the boy, who tried to escape.

By the time the boy’s grandmother emerged from the house after preparing lunch, ignorant of what was happening, she, too, was suddenly plunged into the battle to save Lattibeaudiere’s life.

The five-year-old was bitten in the head, neck, back, arms and leg, and is currently at the Bustamante Hospital for Children undergoing treatment.

When The Gleaner visited the family at their Mannings Hill district home yesterday morning, two mongrel dogs were chained at a section of the premises. The brown-coloured culprit, suspiciously studied The Gleaner’s news team, while the other dog growled and barked.

The family reported the incident to the police but claimed that the cops were hesitant to charge the family member because “it is a family thing”. They were reportedly advised to work it out among themselves and, if necessary, get a lawyer. It was also recommended that they consult with the Jamaica Society for the Prevention of Cruelty to Animals.

According to Milton Bonner, on the day of the incident, they made two trips to an area on the large family land to dispose of trash, not far from where the animals were chained. On the third trip, the dog broke loose and launched his attack.

“Is mi cousin dog. Di dog rush we, and I defend the child. Him grab at the baby, and I dive at him and grab him. There was a piece of rope on him, and mi hold di rope, and him bite mi. Same time I tell the child to run,” the grandfather recounted.

“Him grandmother, who was inside the kitchen, didn’t know what was happening, and she came out, and same time the dog came over and she hold the child, trying to protect him, and di dog just grab on to the child again. She and the child fell on the ground, but by that time I came over and held on to the dog and tell them to go inside. The dog bit him all over.”

He continued: “My wife, the child’s grandmother, had taken something and hit him. She didn’t get any bite. It was just me and the baby. I remember how I was just trying to get the dog away from him because at the rate at how him was going, him a try kill. When we get inside the house, him start go round and round the house like him a seh him have to get we. We couldn’t even come out. Mi call mi cousin and seh di dog bite we up. Him seh we must take the car and go doctor. We were in the house for over an hour. He picks up gas in Portmore, so when he came was when we actually got to come out.”

Tamara Bonner, the child’s mother, is growing steadily frustrated and impatient due to her cousin’s nonchalant approach towards compensating her for the injuries to her son.

She said that despite the incident and the dog still being there, her son is eager to go home.

“When I went to look for him yesterday, he walked towards me. He came to me and asked if he could go home now. I told him I had to wait to hear from the doctor before we can leave. Him seh him head and cheek were hurting him. Other children were trying to play with him, and he told them that he wasn’t in any playing with them because he has his brothers at home,” the mother shared.

“His cheek, they had to pin it up. Everywhere else, they’ve been dressing it. Even one of his calves was ripped.”

Tamara said when she reported the matter at the Stony Hill Police Station, she was encouraged to work things out with the relative. When she went back on Saturday, she claimed she was told to get a lawyer as only a lawyer could push it further.

She continued: “I have a receipt and went to the police for a copy of the report that I made. They said the lawyer have to give them a letter for me to get that report. I will source one and do what I have to do because he (my cousin) is not helping any at all. I told him the Wednesday night that ‘I am not going to press any charges against you. I just need you to do the necessary things’, but he is not. He said he finds it hard to put down the dog because they protect his cooking gas business when he is not around.”

On November 17, the Dogs (Liability for Attacks) Act 2020 was passed, with criminal and civil liability for dogs that attack, injure and/or, cause death to a person.

The bill was passed following several attacks on members of the public, including five-year-old Mickele Allen last month.

Fines ranging from $500,000 to $3 million or imprisonment from six months to 15 years are being proposed as criminal penalties where an individual is attacked by a dog. The law also provides for civil liabilities if the dog causes injury in any place other than its home or where it is normally kept.