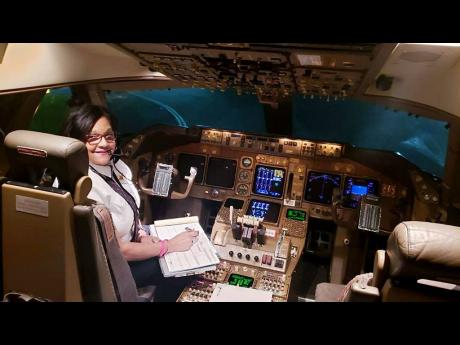 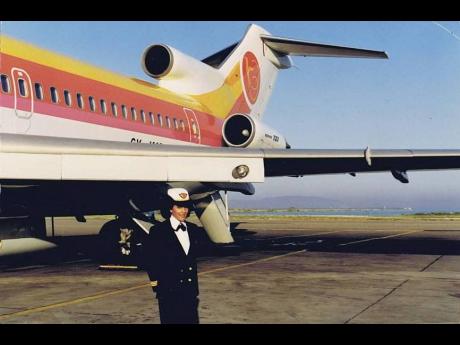 Contributed
Captain Maria Ziadie-Haddad, who made history when she became the first female pilot to fly an Air Jamaica plane.
1
2

The woman who became the first female pilot to captain an Air Jamaica aircraft has hung up her wings after more than four decades of commandeering the skies.

A Montegonian by birth, Captain Maria Ziadie-Haddad, who has the record of flying to 108 countries, logging more than 20,000 flight hours, completed her last commercial airline trip recently, when she flew an Atlas Air B747-400 from Riverside, California, to Cherry Point, North Carolina.

Ziadie-Haddad, the third woman in Jamaica to earn a local commercial licence, says she plans to teach aviation in the near future.

When she sat in an aircraft in 1975 at Wings Jamaica to obtain a private pilot certificate, two other Jamaican women had paved the way, Earsley Barnett and Yola Caine, who went on to work for the Jamaica Defence Force.

Now highly respected in the profession, it was determination, mentorship, and ambition that brought her to the pinnacle of her career.

In an interview with The Gleaner from her home in Florida on Wednesday, Ziadie-Haddad said she was turned down when she first applied to Trans Jamaica be a pilot. The former national carrier Air Jamaica advertised the criterion of ‘Males Only’.

But as disappointed as she was, she wasn’t about to give up.

Growing up, Ziadie-Haddad thought she would have gone into medicine. She studied social studies and psychology during her first year at college in Canada.

But deep inside, her passion was flying, a desire sparked from she was five years old. She also knew the day would come when she would fly a jumbo 747.

“After a year in college, I decided to take some time off and I joined Air Jamaica as a flight attendant in 1974. By then airlines worldwide were hiring women airline pilots,” she told The Gleaner.

While employed to Air Jamaica as a flight attendant, Ziadie-Haddad had first-hand experience with airline operations and many opportunities to view the flight deck of the DC9s, DC-8s, and B727 while serving her passengers.

By the time she learnt to fly and experienced the rejections, those who were mentoring her, such as the late Frederick Carl Barnett, encouraged her to maintain her role as an instructor.

By then, women were becoming more involved in aviation in the United States and Canada, and the doors were opening.

“It was just a matter of time,” stated the female pilot.

By the time she was accepted by Air Jamaica, Ziadie-Haddad recalls that few were against such a move.

“If you were efficient and a very able person in the job, you commanded respect for your position,” she said.

Two years later, she flew with three of the four who were then in the service.

One of the most memorable flights she recalls was with the all-female crew of 1997. She had flown with first-officer Debbie Bailey McMaster.

Her longest flight to date has been from Hong Kong to Cincinnati, Ohio – 16 hours non-stop.

Ziadie-Haddad speaks glowingly of the Arab Emirates, adding that Middle Eastern food captured her taste buds. In many of her travels, she would link up with Jamaicans, including former colleagues, broadening her horizons while at it.

“I learnt a lot from the people and the culture in the United Arab Emirates, which was completely different,” Ziadie-Haddad told The Gleaner. “So was Hong Kong, where I liked the climate and could move around fairly safely, visiting the sites and savouring the food.”

Nairobi, Kenya, and Ghana also amazed her, and she said some of her best flights involved taking in captivating vistas as she crossed the Sahara Desert.

She reminisces about flying across Alaska, northern Canada, and Greenland, awe-struck at the glaciers and snow-capped mountains.

Ziadie-Haddad said she never dreamt she would have seen so many foreign lands. The winter wonderland that will live with her for a lifetime was the Aurora Borealis, a night-time phenomenon with an engaging light display in the sky.

Recognised for her pioneering role in the field of aviation, Ziadie-Haddad, who is married to Brian, an A320 captain with JetBlue Airways and the mother of two boys, has been honoured by the Government of Jamaica, the Jamaica Civil Aviation Authority (2011), the Jamaica Cultural Alliance (2008), and Jamaican Women of Florida (2017).