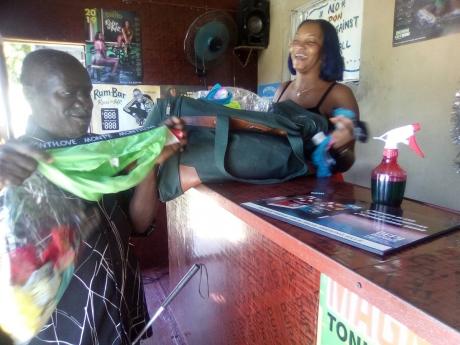 Photo by Rasbert Turner
Customer Jodian Annon cracks up as visually impaired salesman Paul Brown shows off some of the merchandise. 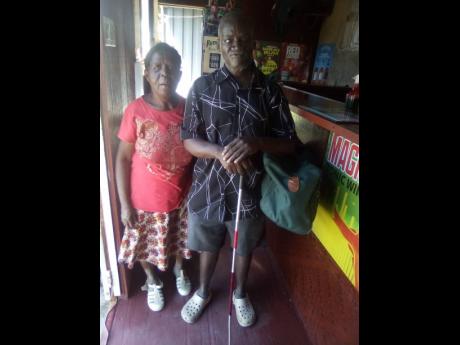 Photo by Rasbert Turner
Paul Brown and his wife, Gloria, walk with their bag of undergarments for sale in Spanish Town, St Catherine.
1
2

Although Paul Calvin Brown has been blind since he was 16 years old, he is still blessed with vision to make an honest living as an avid salesman, inspiring people with his entrepreneurial spirit.

The Gleaner caught up with the walking salesman as he tried to entice customers to purchase items from his stock of women’s underwear in Spanish Town, St Catherine, on New Year’s Eve.

He told The Gleaner that he went into business to support himself and his wife.

“A long time mi a do this but mi affi work harder fi support mi wife. Mi can tell you that she is mi foot, mi hands and she is mi eyes, so mi affi support her,” he said. “I have been married for eight years, and trust me, she is mi strength, so mi affi work. Can’t sit down. Although we need some help, mi nah stop trying.”

Brown said that having lost a bit of his sight, he went to the Salvation Army School of the Blind along Mannings Hill Road in St Andrew to study furniture-making. Those plans were later dashed when he went totally blind.

Besides selling undergarments, Brown occasionally buys and sells bottles to continue providing for his household.

The McKoy Gardens, Spanish Town resident said that his greatest wish is to get some paint for the house and funding to access a more reliable source to buy his goods.

The 58-year-old St Catherine-born man said that although he became blind as a teenager, he was determined to survive and would sell on his own until he met Gloria Whyte and they tied the knot.

“I celebrated my eighth anniversary on December 29, 2020 with my wife, Gloria Whyte Brown,” he said proudly.

Gloria, who listened attentively throughout the interview, said that she was drawn to Brown because of his kindness and drive.

“Mi admire him because him kind and always a provide fi mi. Anytime he gets anything, he shares it,” she said.

Brown said that of the nine siblings – five brothers, three sisters and himself – he is the only one with blindness.

One of his customers, Jodian Annon, expressed great admiration for the Adventist couple’s entrepreneurial spirit.

“I sometimes see him passing my way and I even assist him with directions. I support his business because he is blind. It is an inspiration that he has not given up on life,” she said.