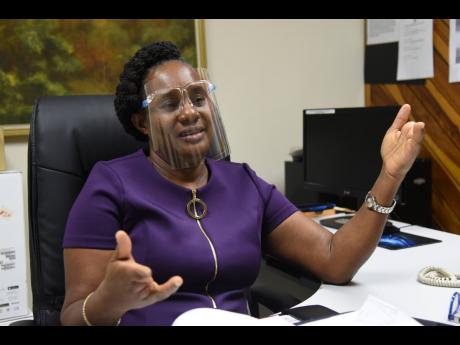 Kenyon Hemans/Photographer
Dr Christine Hendricks, executive director of the Jamaica Council for Persons with Disabilities reflecting on a challenging 2020 in light of the COVID-19 pandemic.

More than 1,000 persons with disabilities have been added to the registry of the Jamaica Council for Persons with Disabilities (JCPD) since March 2020, an influx caused by the COVID-19 pandemic.

Hundreds of people who reached out to the council for assistance were never registered, and this registration helps to make planning for and mobilising PWDs more efficient.

JCPD Executive Director Dr Christine Hendricks has described 2020 as a challenging year all around, more so for persons with disabilities (PWDs), as a number of needs were highlighted, with the major ones being challenges accessing food, electronic devices, and data.

Now in 2021, she shared that the need for food and devices remains even though they received more than 600 tablets from the Digicel Foundation and were assisted with food packages by Food For the Poor and various partners.

Hendricks shared that challenges came from varying angles and are far from over, but with the help from international partners, which provided a platform for best practices to be shared, they have overcome some of them.

Hendricks recalled that a home in Manchester reached out, seeking guidance about how to communicate effectively to autistic children who they cannot hug due to physical- distancing protocols to reduce the risk of spreading the deadly virus.

“We came to the realisation that full social distancing for persons with disabilities might not be possible because we do have some persons who will need that caregiver close to them,” she said, adding that this demands that caregivers take extra care while they attend to PWDs and wear protective equipment at all times.

“Persons with Down’s syndrome and maybe moderate intellectual disabilities – those persons with disabilities who it might be a little bit more difficult to explain to – those are the persons who might be at increased risk because they are open-armed. They hug and they love it,” Hendricks pointed out.

While the JCPD has not received any reports of PWDs contracting COVID-19, Hendricks is urging persons to adhere to protocols, calling on parents and caregivers, especially, to ensure that children are not exposed.

Since March 2020, schools have been largely closed, with lessons moving online, except for 17 institutions, which were reopened under a two-week pilot programme.

Hendricks told The Gleaner that COVID has allowed parents to play a game-changing role in education.

“Parents now had to be learning sign language because sadly, a number of parents who have children who are deaf do not necessarily know sign language. It was an opportunity for parents to know their children better and communicate better with them,” the executive director revealed.

She explained that when she last spoke with the Jamaica Association for the Deaf, they shared that they were still working through the challenges.

On the other hand, blind students were better able to log on to virtual classes once they had a device as there were already existing software to convert text to voice.

The Salvation Army School for the Blind is the sole educational institution for blind and visually impaired children in Jamaica. It also has boarding facilities for up to 200 students and caters to students across the island. Since its closure, in a bid to contain COVID-19, students have returned home to their families.

“Usually, the children would be at school, centrally in Kingston, and Internet service is usually more accessible here, but in the rural areas, even if you have a tablet, that would still pose a challenge because of the limited Internet access,” Hendricks shared.

She continued: “We tried to ensure that deaf and blind students got tablets, but I’m sure not everyone of them received them because persons with intellectual disabilities, which is a large group, they also needed.”