Butch hangs up sandals - Footprints of a legacy left behind 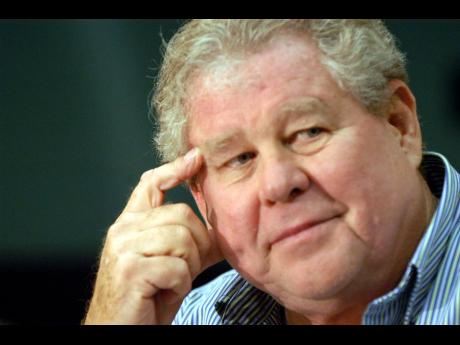 Gordon ‘Butch’ Stewart, the man who built an all-inclusive hotel empire which spanned the Caribbean despite having no prior experience in that sector, hung up his sandals on Monday and has walked off into the sunset with footprints of a legacy left behind.

The 79-year-old Stewart, who had an unmistakable rusty Jamaican accent, was born in Kingston on July 6, 1941, but grew up mostly in Honeymoon Bay, Ocho Rios.

It was there, an American sailor gave him the name ‘Butch’.

His mother, Jean Townsend Stewart, ran an appliance dealership while his father, Gordon, was a radio maintenance technician.

Butch Stewart was educated in England, but returned to Jamaica where he worked as a salesman and climbed the corporate ladder eventually becoming the sales manager of Dutch-owned Curaçao Trading Company.

That taste of success led him to form his own business in 1968 – Appliance Traders Limited, known as ATL today.

Stewart started out his career in the air-conditioning sector before making the transition to other appliances and furniture before expanding ATL into the automotive sector.

He went on to found The Jamaica Observer in 1993, but it was his role in the tourism sector which brought him to prominence not only in Jamaica, but across the region and the world.

The idea for the hotel came as a result of Stewart’s ingenuity as he set about finding the answer to Jamaica’s shortage of foreign exchange, which reached dangerously low levels in the 1970s, when there was a flirtation with democratic socialism.

His appliance business was not spared and so he figured that foreigners bringing in hard currency could be the solution to foreign-exchange problems.

In defiance of many in his inner circle, and warnings that the noise from the nearby Sangster International Airport would make his venture a failed experiment, Stewart bought and transformed the 99-room Bay Roc beachfront hotel, which was under water in 1981.

Under his leadership, the then struggling hotel was transformed into a flagship property for Sandal Resorts International.

Over the decade to follow, Stewart acquired many other properties which were in shambles and added his touch of shrewdness and brilliance to build out his empire.

But Stewart, in paying tribute to those who worked on the property, credited the locals and their inherent warmth for the success of his business which made him into a multimillionaire.

He had demonstrated that he was a believer in the economic prospects of Jamaica and famously touted that those who failed to see the opportunities were wearing blindfolds.

By 1996, Sandals’ footprints had extended beyond Jamaican shores to St Lucia, Bahamas and Antigua and Barbuda.

Now, there are 15 such hotels across the Caribbean.

His journey establishing those hotels, though, came with Stewart locking horns with governments and as a tough negotiator, some of those fights were public as prime ministers demanded tax payments.

Stewart had fought stridently against attempts by governments to impose taxes on the hotel sector, warning that it would “kill tourism stone dead”.

He said that Jamaica was “radically overtaxed” already, and stated that the successes in the tourism industry were due to the fact that the “bureaucratic shackles” had been removed from it.

Not one to hold his tongue, the Sandals boss blasted the Turks and Caicos Islands government last October, calling it “the most ineffective” Sandals has ever “had to deal with when compared to other jurisdictions in which we operate”.

In 1990, Stewart and his family got devastating news when he lost a son in a car crash in Miami, Florida.

His felt deep sorrow at the tragedy and said at the time for two months he felt “useless”.

Not long after, in 1992, Jamaica encountered choppy waters with foreign exchange again because of international speculators and it was Stewart’s leadership again which helped to rescue the economy.

When the speculators pushed the price of the US dollar from J$21 to J$32, Stewart pumped US$1 million per week into Jamaican banks at a rate of 25:1, which cost him US$30 million.

But in the end, the speculators were defeated, and the exchange rate had been stabilised around J$22 to US$1.

With his success of transforming run-down businesses into a signature of success, Stewart’s next project was the troubled national carrier Air Jamaica, which had been in the red due to poor management.

He took over majority stake in 1994 with the hope of turning it around like he did with properties.

In 2004, after a roughly a decade, Stewart handed back control of Air Jamaica to the Government.

To this day, he had been criticised for his management of the carrier.

Last May, roughly two months after the island began battling the COVID-19 pandemic, Stewart donated $500,000 to each of the 63 members of parliament – a total of $31.5 million –to ramp up the COVID-19 fight in their constituencies. The donation raised eyebrows in some quarters, even as the island’s economic situation got worse.

Stewart’s patriotism led to him being recognised by the Government as a Commander of the Order of Distinction (CD) in 1988.

He went on to receive the Order of Jamaica a few years later.

He was also named The Gleaner’s Man of the Year in 1987 and 1992. He was also awarded the inaugural RJRGLEANER Pioneer Award for his contribution to the tourism sector at the 2017 staging of the Hospitality Jamaica Awards.

“A singular personality and an unstoppable force who reveled in defying the odds, exceeding expectations and whose passion for his family was matched only by the people and possibility of the Caribbean, for whom he was a fierce champion,” Adam said.

“There will never be another quite like him and we will miss him forever.”