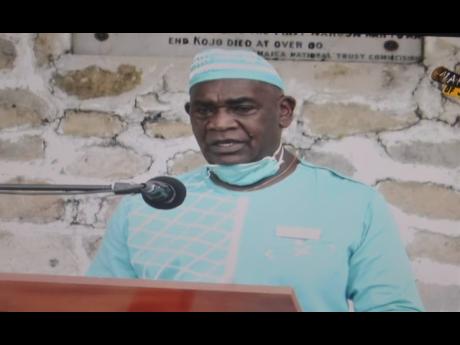 For the first time in their 283-year history, the Accompong Maroons in St Elizabeth held their annual celebration of the signing of the Maroon treaty and the birth of revered hero Cudjoe virtually.

The celebrations were restricted to Maroon residents and few outside guests in physical attendance at the annual January 6 event.

Held under the theme ‘Celebrating The Power of Our Heritage’, the event saw the local Maroons, many wearing masks, engaging in a musical march to the local Kindah Tree, where the Maroon treaty was signed in 1738.

As per tradition, they then had a traditional meal of roast pork and yam before continuing their march to the community’s Cudjoe Monument, followed by several Zoom messages from Jamaica’s government representatives and leaders from other Maroon communities.

The residents also officially received a Coaster bus, which had been handed over by Culture Minister Olivia Grange a few days earlier.

“While we are unable to gather in our numbers, we are grateful that technology has allowed us to still participate in this very important commemoration and rituals of family and friendship,” Grange said in her brief address. “This annual event has ensured that we do not forget the enduring contribution of Captain Cudjoe and his warriors to our freedom today, and thanks to technology, we have been able to still communicate and still celebrate as a proud people.”

Colonel Ferron Williams, leader of the Accompong Maroons, described the Maroons as determined freedom fighters who never gave up even in the face of adversity.

“We did not come here under any easy circumstances. From the motherland, we have been fighting for our freedom, … and not for one minute did the British ever win a skirmish against us,” said Williams. “Our children, from age three, have been taught the Maroon history and heritage, so if you even see a three-year-old and ask who the Maroons are, they will tell you that we are the first freedom fighters in the Western Hemisphere.”