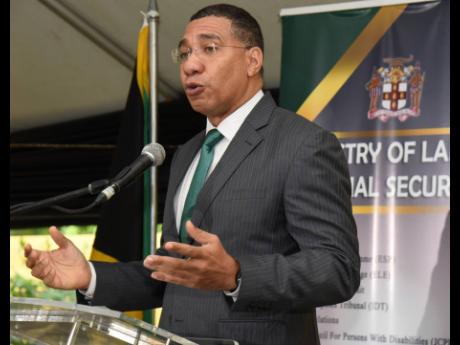 Prime Minister Andrew Holness yesterday took a swipe at the critics over their “hypocrisy” in calling for an end to states of emergency (SOEs) across the island last year.

Pointing out that the Government has spent $40 billion on equipping the security forces with hardware, software, and training to tackle crime and violence over the past four years, he admitted that the returns have not yet been commensurate with the expenditure.

“Some of the software strategy has been taken away. We no longer have SOEs (states of emergency), and it would be interesting to analyse what has been the effect of removing the capacity of the SOEs ’cause there is a great deal of hypocrisy,” said Holness as he delivered yesterday’s keynote address at the National Day of Prayer – Heal the Family, Heal the Nation service at the Power of Faith Ministries in Portmore, St Catherine.

“The same people who say do away with the SOEs, they are the same ones who are on the phone calling the [police] commissioner to say bring the police back into my area,” he said, adding that the initiatives should be credited for a reduction in homicides last year.

The SOEs in several police divisions across the island were brought to an end ahead of the general election last year.

Holness said he was saddened by the savagery of some of the crimes committed near year end and lamented that murder figures for the new year were already outpacing last year’s.

“Government has to turn its attention to investing in the ‘heartware’ because as I reflected on some of the heinous crimes that have happened in the last few weeks – family members killing family members, silly arguments at dance that have terribly injured our young people – there is no amount of policemen that could stop that,” he said. “If we doubled or tripled the amount of policemen that we have, we couldn’t stop that family dispute. We couldn’t stop the three persons murdered in a rural part of Clarendon where no crime nuh happen there so. Man just find themselves there and wipe out ... . No amount of police is going to stop that, and we have to acknowledge it.”

He said that 13 homicides had already been recorded for 2021, three more than this time last year, also pointing to an increase in savagery at Christmastime each year.

While the investments in hardware, software, and training for members of the security forces are beginning to pay off and will reap dividends in the years to come, in the interim, Holness is hedging his bets by turning to a higher force for help.

“There are many countries that are poorer than Jamaica and do not have Jamaica’s murder rate. We have a violence epidemic. You are the people that have a significant role to play by virtue of your membership in the institution of God, and I call upon you today as you pray for the healing of the nation, to pray for peace in the hearts of men,” he urged church leaders.