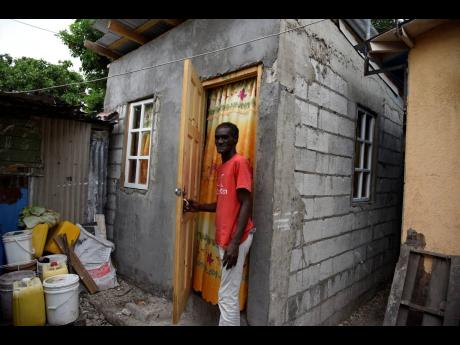 Nicholas Nunes/Photographer
Nigel Townsend stands in the doorway of his recently completed house in the Fitzgerald Avenue community off Maxfield Avenue in St Andrew. Good Samaritans rallied to construct a new home for him after The Gleaner highlighted his living situation in a collapsing structure. 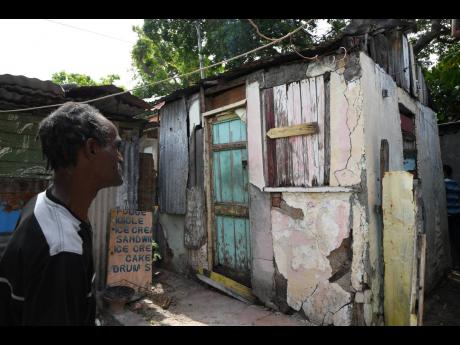 File
In this June 2020 photo, Nigel Townsend looks at his rickety home while expressing fear that it could collapse and injure or kill him. 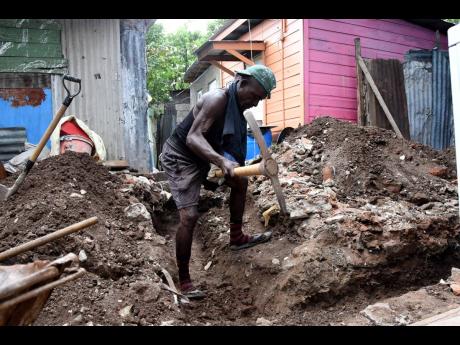 File
Dukie Johnson, a resident from Maxfield Avenue, digging the foundation for the new house. The construction was the result of volunteer efforts by residents and donations by Jamaicans far and wide to bring relief to Nigel Townsend.
1
2
3

Nigel Townsend stared at a photograph of the dilapidated structure, where he used to lay his head, in disbelief when The Gleaner visited him last week. His eyes fastened on the photo taken when our news team first highlighted his plight; he could barely smile. The new year has , however, found favour for him as his newly a built home is ready

Townsend, a resident of Fitzgerald Avenue, a community off Maxfield Avenue in St Andrew, got overwhelming support from Jamaicans at home and abroad after The Gleaner highlighted his situation, living in a crumbling house last June.

The 60-year-old is grateful for the turnaround, as his life depended on it.

“I feel nice about the structure,” he said last week. “I thank the community, and thank The Gleaner and the rest of people who help me.”

The house has boosted his spirits for 2021, he said, expecting a great year.

The dilapidated structure in which he lived had caused concern, with him saying that he was worried that it could cave in on him during his sleep or during adverse weather.

“Any how a did the old house deh yah, me get wet up ... . I would have washed away,” Townsend said of the devastating heavy rains which lashed the island last October and November.

The old, board structure was demolished as work began on a concrete replacement. The project took roughly seven months to complete and was hampered by COVID-19 restrictions and crime in the community.

One of the Fitzgerald Avenue residents who assisted with labour, Nicholas Thompson, was shot and killed in November.

The residents nonetheless still pooled their skills together and got the job completed in time for 2021.

Carpenter Danny Burbles, who was instrumental in the construction, said that he did not take a dollar for his work and was glad to assist because Townsend is a good man.

“Good youth and thing. Him do nuff things fi people in a the community, so we try to help him out,” Burbles said.

Townsend told our news team that he recently began to sleep in his new house, having spent nights outdoors waiting for his time to move in as the work neared completion.

“I sleep much better now. The only thing I would like now is if the house tile out. I would like to paint it or get a mattress. I am going to hustle and work and get it done. I thank everybody who made this possible,” he said.